Bail reform is just the beginning of criminal justice reform 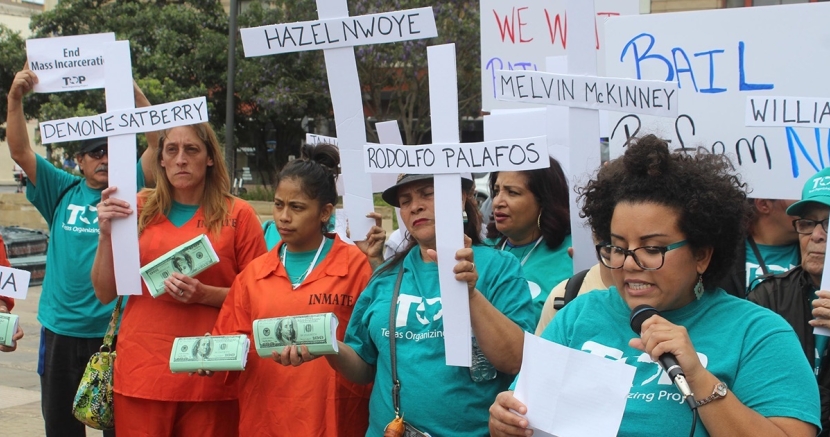 Texans’ lives depend on access to justice and health care.

Bail reform, specifically the end of cash bail, is desperately needed across the U.S. And finally, places in Texas like Harris County are jumping on board.

Being required to post bail can be life-ruining for many defendants who, really, are just like you and I. It can mean losing a job, not being able to take medication, or missing payments on rent.

A federal appeals court recently ruled that Harris County had been incarcerating too many people pending trial, and that the scheme of fixing blanket amounts of bail without consideration for individual circumstances is unconstitutional.

Even prior to the bail lawsuit’s final settlement, which was recently approved, more judges have started releasing people charged with non-violent misdemeanors and some felonies without having them come up with cash first.

That’s great, and it’s a big deal. But it’s not enough.

The settlement to Harris County’s misdemeanor bail lawsuit includes reforms like funding to help people get to court and early intervention from social workers to assist with emergent needs like housing, clothes, and food.

That’s great, and it’s a big deal. But it’s not enough.

Jails usually have a mental and physical health screening process during intake, but only really emergent issues are taken care of, and most people would likely want to move forward with their processing through the system than be held back for treatment in the jail clinic.

This means Texans moving through the system:

All over the U.S., jails provide health care to people who are unable to access it in any other way.

As egregious as this fact might be, we have to do what we can to make sure that medical treatment in jails is timely and effective. Providing an arrestee with medication quickly on their arrest and then providing a supply of “bridge” medication on discharge (meant to bridge the gap between release from jail and the ability to see a doctor) is crucial to any real concept of criminal justice reform and holistic treatment of the issues that cause people to fall victim to the cycle of poverty, arrest, and incarceration.

Of course, this all goes hand-in-hand with the outrageous cost of medical treatment for Texans, especially with one of the highest uninsured rates in the country.

The people being impacted by this are not only the housing-insecure and the severely mentally ill, but also people who live working-class lives and for whatever reason, end up contacting the criminal justice system.

A father and son

Once, a long time ago, I represented a young man, arrested with his father for taking their own tools from a construction site after they had not been paid. They were both booked into the jail and waited for three days to be processed, given a bond, and released pending disposition of their case.

The father did not receive his blood pressure medication for those three days, and though it was fortunately not life-threatening, it was definitely frightening and uncomfortable.

It took me months of appearances to get the prosecutor to finally evaluate the case and dismiss the charges. In the meantime, the man and his father missed work for court appearances, lost money to the bonding company, and fell behind on bills and rent because of charges that should have never been filed.

I think about myself and how difficult it would be for me to miss that much pay, to get that far behind at work, and to have to pour out hundreds of dollars for bondsmen and pretrial release “supervision fees,” and I’m not sure if I could pay for my daughter’s daycare.

Once, I represented a woman who was three days postpartum and unconvincingly accused of slapping her older, larger brother as soon as she came home from the hospital.

As she stood outside the courtroom in a stinking orange jumpsuit, shackled, two days after her arrest, I held her newborn baby to her chest as she wept and kissed him and tried to memorize each of his tiny features.

In addition to the distress and anxiety of being in jail and away from her newborn, her physical pain was crippling. She was unable to express her breast milk as it came in, and panicked about being able to feed her son on her release. Though she had been discharged from the hospital before her arrest, this was a time for healing and bonding and it had been taken from her and from her son. None of her medical issues were emergent enough to require actual treatment at the jail, so they gave her some maxi pads and told her to toughen up.

A woman suffering from diabetes

Once I represented a woman who was arrested for a DWI. She was actually in diabetic shock, which has similar symptoms to alcohol intoxication. She was taken into the jail and evaluated briefly by a nurse there but never given any insulin.

When she was released three days later, shooed into a parking lot unceremoniously, her blood sugar was four times what it should have been and she was still disoriented and sick, but lucky to be alive.

More often than not when I represent someone, I see something in them that reminds me of someone I know and love: my father, my husband, my sister, my best friend from high school.

Bail reform is a great step forward in the fight to overhaul the criminal justice system, but we have to keep reminding everyone around us that in this society, literally anyone could be in this unfortunate and terrible position of facing charges, and we must advocate for increasing resources to provide humane and ethical treatment of our brothers and sisters, both in and out of jail.