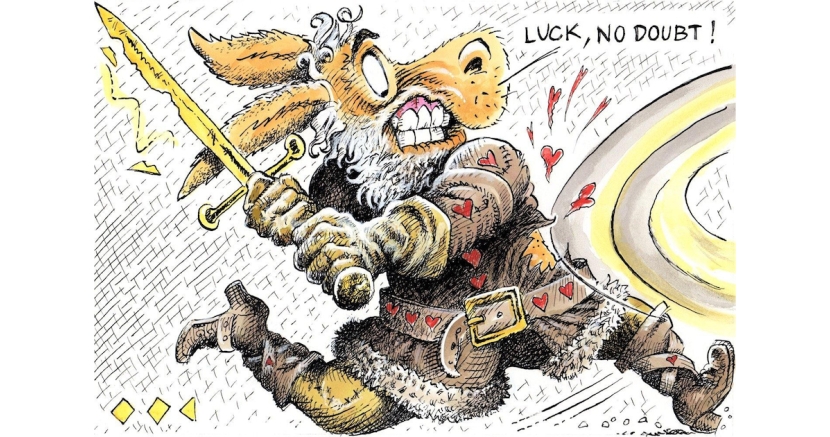 Illustration by M. Scott Byers
While Republican leaders pat themselves on the back, their achievements have more in common with 19th Century phony patent medicines than 21st Century solutions.

Looking upon the follies of the 2019 Texas Legislature, we might heed the words of wise old Uncle Ellis in Cormac McCarthy’s novel, “No Country For Old Men”:

“You never know what worse luck your bad luck has saved you from,” Ellis said.

For instance, pro-democracy forces in Texas have the bad luck to face a Republican-led Legislature hell-bent on curbing voting rights for millions of Texans. But, GOP over-confidence (and determined opposition) helped hold back most proposals to restrict the vote. GOP success would have been Democrats’ worse luck.

The Republican leadership — Gov. Greg Abbott, Lt. Gov. Dan Patrick and new House Speaker Dennis Bonnen — had assured Texans that this year’s session was all about education and property tax reform. Yet, the Republican obsession with social control was strong as ever.

The Legislature passed laws to control women’s bodies and health, and passed other laws allowing religious sects to discriminate against objects of their hate. Brethren, it would appear that the temptation to meddle in the private lives of Texans was just too much for Republican rascals to bear.

Meanwhile, please let us know if your property taxes are actually any lower (Corporations, no need to answer. They always cut yours.) Property taxes are high, of course, because the Legislature in previous years slashed its funding for public schools, forcing local schools to raise your taxes.

By gum, Republican lawmakers tried. They tried and failed to raise the state sales tax a whopping 16 percent. That’s robbing Peter to pay Peter and leaving poor Paul to fend for himself.

Students, raise your hands if you believe our schools were funded at levels sufficient to provide excellent education to our kids far into the future. I’d say you could lower your arms now, but none of you raised them in the first place.

The Republican promises weren’t really born out of good faith in the first place. Chastened by significant losses in 2018 legislative races, the GOP leadership made their idle pledges to moderation in hopes of winning back alienated urban, suburban and ex-urban voters.

Once again, the people of Texas had the bad luck to have a gang of ne’er-do-wells in charge of the Legislature, but the ne’er-do-wells’ magnificent ineptitude saved us from the worse luck.

This was the legislative session that began with revelations of a major effort to purge millions of Texans from the voting rolls. The perpetrators were really Abbott and Attorney General Ken Paxton. But, Abbott’s appointed secretary of state, David Whitley, took the fall when the Texas Senate refused to confirm him as the state’s top elections officer. Ineptitude, once again, saved the day.

As the days of the session drew short, there were persistent rumors that Patrick would try to get Whitley confirmed by calling up a vote when a couple of Democrats had left to go the bathroom, leaving the opposition a vote or two short. What is it with Patrick and bathrooms?

Republicans found other ways to disempower millions of Texans: They passed several measures aimed at ghettoizing big cities and counties, home to a lot of people who Republicans don’t like. The most onerous bill limits what local governments can raise to take care of critical services, including fire and police protection.

This legislative session is ending with the leadership patting themselves on their backs. Their achievements have more in common with 19th Century phony patent medicines than 21st Century solutions to Texas’ real problems. But at least legislative ineptitude seems to have saved us from even worse outcomes.