Back from the Grave 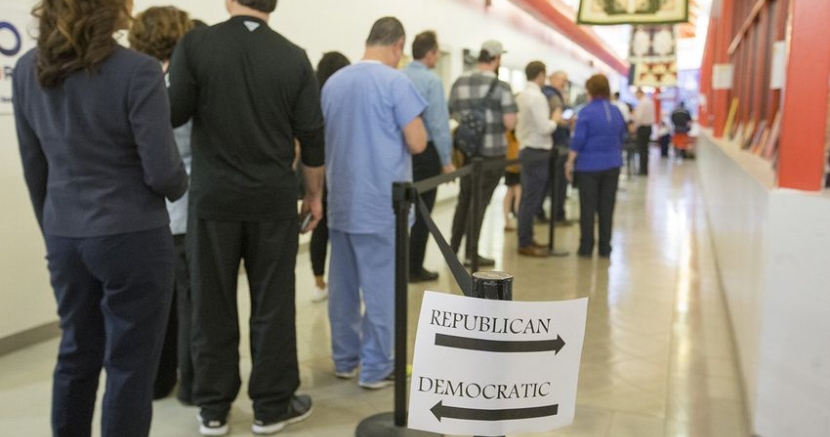 The Right’s fear tactics are now more motivating Democrats rather than intimidating them.

There’s an old tale about a fellow stumbling toward home from the bar late one night, walking through a graveyard. He doesn’t see an open grave and falls right into it. He tries to claw his way out, screaming for help, but help never comes, so he huddles up in dark corner to stay warm.

Not much later, another fellow from the same bar stumbles through the same graveyard and tumbles into the same open grave. He tries to claw his way out, screaming for help, when the first fellow, unseen there in his dark corner, says in a scratchy voice, “It’s no use. You’ll never get out.” And with that, the second fellow springs right out of the grave like a high jumper.

The story comes to mind while thinking of the Right’s use of fear to intimidate and demoralize its political opponents, tactics at the very top of its path-to-power playbook. “It’s no use, you’ll never get out” is a frequent Republican’s message to Democrats.

The trouble with the fear message is that it can also be a powerful motivator, like it was for our friend leaping easily to safety in the graveyard.

Republicans thought they’d left Democrats for dead, and then along comes Donald Trump, a graveyard ghoul if ever there was one, and, sure enough, energized Democrats are leaping to life in numbers not seen in a long, long time.

It’s not all Trump’s doing. Gov. Greg Abbott, Lt. Gov. Dan Patrick, Attorney General Ken Paxton – they are all busy trying to intimidate women, teachers, young people just starting out in life, Hispanic citizens, and, most importantly, Known Democrats, in and out of elected office.

Part of it is kind of laughable, really. There’s certainly nothing frightening about any of those three. And do we shudder in the presence of Agriculture Commissioner Sid Miller, super-powered by his Jesus Shot, or Land Commissioner George P. Bush, who’s busy losing his own battles of the Alamo? Hardly.

The whole thing’s a bluff, really, aided of course by some anti-democratic voter suppression tactics shoveled like graveyard dirt on top of the resuscitated and the re-energized.

But, over the years it’s had its effects. It’s not unusual to hear otherwise intelligent Texans with Democratic leanings tell others that it’s hopeless. A losing campaign is not used for lessons learned but pointed to as an inescapable grave it’s no use to try and struggle out of.

Small missteps by progressives get treated as deadly accidents that prove the fatalists’ points. Voters stay home because they’ve become convinced their involvement won’t change anything.

Well, while the tired and the complacent are busy justifying their fatigue and complacency, a couple of generations worth of young Texans of all kinds are leaping to life. They’ve seen through the foggy old lies of the Right. What intimidated some has motivated them.

This was bound to happen, of course. Republicans have known it was coming, hence all their efforts to limit voting rights and use the legislative redistricting process to further disenfranchise millions of Texas voters. They wouldn’t have to do that if they believed their fear tactics and authoritarian meany-faces would work forever.

Democrats have made their fair share of mistakes. They have relied too much on a rising tide as if it would float them without effort from the hole they were in. And, yes, there’s been the inevitably destructive efforts to rise by climbing over others and pushing them down.

In so many ways contemporary American politics never, ever escapes the adolescent habits of high school student council contests. That an empty-headed playground bully bluffed his way into the presidency proves that point rather nicely. Democrats have sometimes been their own worst enemies.

There have been plenty of books and studies on the uses of fear and paranoia in politics. You might say the subject has been studied to death.

But, when Scooby Doo’s “Ruh-Roh” mobilizes instead of paralyzes, walls come down, doors to safety open, the good guys save the day and yesterday’s fear mongers are left huddling in the dark corners where they belong.