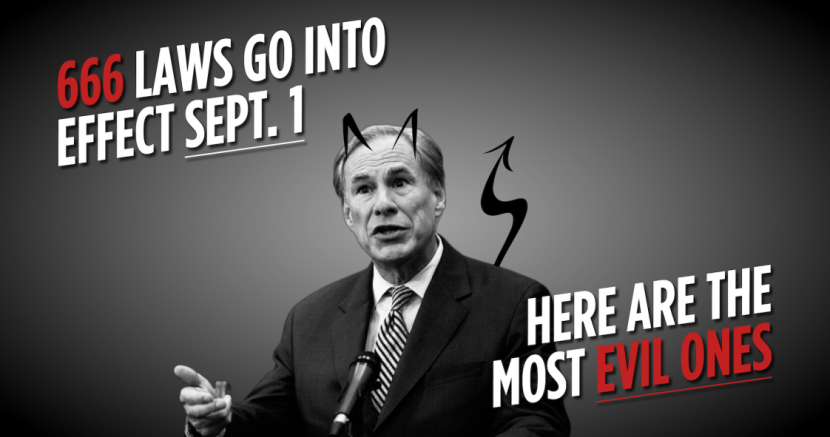 As of Wednesday, Sept. 1, 666 new laws passed during the 87th Texas Legislature go into effect. Three of the most harmful of these laws include Senate Bill 8 (six-week abortion ban), House Bill 1927 (permitless carry), and House Bill 3979 (anti-education).

Here’s more information about these three laws and their impact on our state:

SB 8 is a six-week abortion ban that allows a citizen from any state to sue anyone in Texas who provides assistance to someone seeking abortion, and reap a cash reward. The law bars a vast majority of abortion care in Texas and is the most extreme abortion ban in the country.

When Texans decide to have an abortion, they should be able to do so safely and with dignity - and without fear of legal retribution. This abortion ban is cruel, unconstitutional and an affront to our legal system.

At a time when Texans are suffering from multiple crises, including a global pandemic, Governor Abbott and anti-abortion legislators have prioritized extreme measures to push abortion care out of reach.

All Texans deserve control over our own bodies and access to essential health care, which includes abortion. Regardless of whatever draconian anti-abortion laws are passed in our state, abortions will still happen. Abortion supporters are the majority. We are everywhere, and will not be silenced.

HB 1927 allows most Texans to carry handguns in public without training or permits, putting Texans at an increased risk of gun violence. What this means is that Texans no longer need a license to carry a gun, but you still need one to vote.

Most Texans agree our state needs common-sense gun safety reform and a majority oppose permitless carry, including many law enforcement officers who have spoken out against the law.

Far too many Texans have lost loved ones due to senseless and preventable gun violence, but instead of actually addressing the issue, Texas Republicans are making our state more dangerous with this ridiculous law.

This law censors public school lessons teaching the history of racism and inequality and deprives Texas children of a complete education. It’s part of a thinly-veiled conservative censorship campaign against diversity, equity, and inclusion efforts in the public and private sector.

Students deserve an education that deals in facts, not folklore.  It’s no coincidence that the same actors pushing voter suppression laws based on lies about elections are pushing lies about history. Republicans are on a dangerous mission to whitewash history, and an attack on our history is an attack on our democracy.