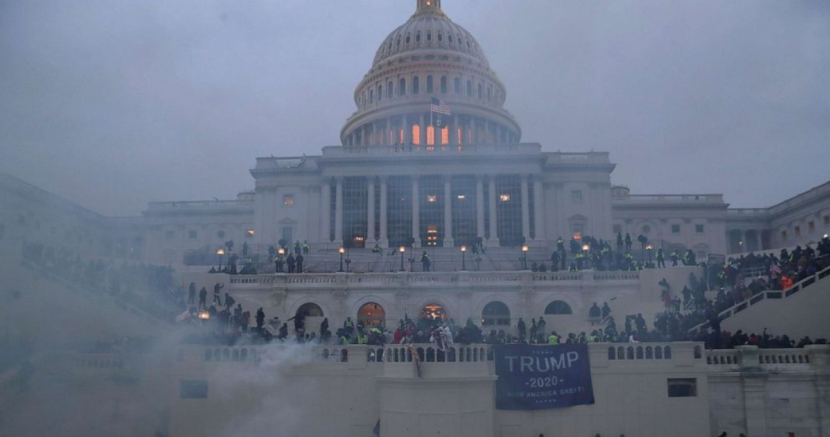 Domestic terrorists stormed the U.S. Capitol on Wednesday, and for many of us, it was difficult to put into words what needed to be said or done regarding this moment that our country has found itself in. But the truth is, this was a dark day many saw coming, and it should not have surprised anyone. This is where our nation is right now.

Progress Texas issues the following six messages to help progressives speak out against the insurrections and seditious acts that took place in Washington D.C.

1. This was not a protest, this was a domestic terrorist attack in the name of Donald Trump supported by years of Republican enabling.

Storming the U.S. Capitol was not a protest, it was an attack - one that sought to stop a democratic election. And when the attack entails gunshots, forced entry into the seat of government, with people positioned in the chairs of the Senate President and the Speaker of the House, that fits the definition of an attempted coup. These are domestic terrorists and they should be referred to as such by the media, the public, and elected officials.

2. These acts of violence were incited by politicians who sought to undermine our democracy, they need to resign or be expelled from office under laws governing sedition.

Republican office holders enabled Trump, spread misinformation about the election, sought to undermine the certification of Joe Biden as a democratically elected winner, attempted to stop the approval of electors, abetted sedition, and inspired the pro-Trump riots. Their actions helped incite the armed assault on the U.S. Capitol, the ultimate betrayal of our country and the offices they hold. The efforts were led by a small group of U.S. Senators like Ted Cruz and Josh Hawley, as well as a large group of GOP House members like Louie Gohmert, and they must be held responsible for their role in the violence. If they do not resign, they should be removed from office by their colleagues in Congress under laws governing sedition.

3. Get real. The first attack on the U.S. Capitol since 1812 is nothing like street protests from summer 2020.

Those who stormed the US Capitol with gunshots and violence on January 6, 2021 were not protesting, they were trying to stop the outcome of an election they lost. They are domestic terrorists who attempted a coup by seizing the U.S. Capitol in the midst of the election certification process, and they committed crimes against our nation and our Constitution. And in the midst of it all, law enforcement took selfies and allowed insurgents to run amok in the House and Senate. These criminals took pictures and videos of themselves trashing congressional offices and sitting in seats of power. Many walked out the Capitol unscathed, with the police holding their hands.

This is not a “both sides” issue.

Black Lives Matter protests are waged against the brutal killings of Black people in our country by police. Black folks are literally fighting for their lives. And in response to those protests, police arrested, tear-gassed, and shot at them. Some were killed and others were severely injured by the very people they were asking to treat them with humanity.

4. Donald Trump is still Commander in Chief and thus a national security threat. The 25th amendment needs to be invoked or Congress must impeach and remove him from office.

Donald Trump has demonstrated time and again that he will act by any means necessary to get what he wants, constantly escalating the stakes. He must be held responsible for inciting this violence. Relying on a social media ban is a juvenile form of punishment and it will not curb his actions. Trump always finds a way.

If the Vice President and eight cabinet members do not invoke the 25th amendment, the House of Representatives must vote to impeach and the Senate must immediately remove Trump from office. In orchestrating a failed coup against his own country, Trump is in violation of our Constitution, has violated his oath of office with an act of sedition, and is a national security threat.

5. The failures of inequitable policing were on full display at the Capitol.

What we saw on January 6, 2021 is that when white vigilantes commit violence, police stand by. But when Black organizers seek justice, police attack. This has been the case in our country for far too long. Our nation has two separate systems of justice, and white supremacy has infiltrated every single institution. The sooner we all recognize this, the sooner we can work to fix the broken system.

For those who say “this isn’t who we are,” the truth is that it IS who we are right now.

Our democracy is fragile and must be protected. This attempted coup was an attack on our Constitution, our country, and on our people. It was led by a president who refused to accept that millions of Americans turned out to vote and elect Joe Biden by overwhelming margins. This was an act of treason that was enabled because of the encouragement of some Republicans who spread lies about this election and the silence of others.

We the people deserve accountability. We have pulled through and stood resilient despite everything that’s been done to divide, derail and dishonor our most basic rights, and we must continue to stand together. Together, we must make this country a place of liberty and justice for all.