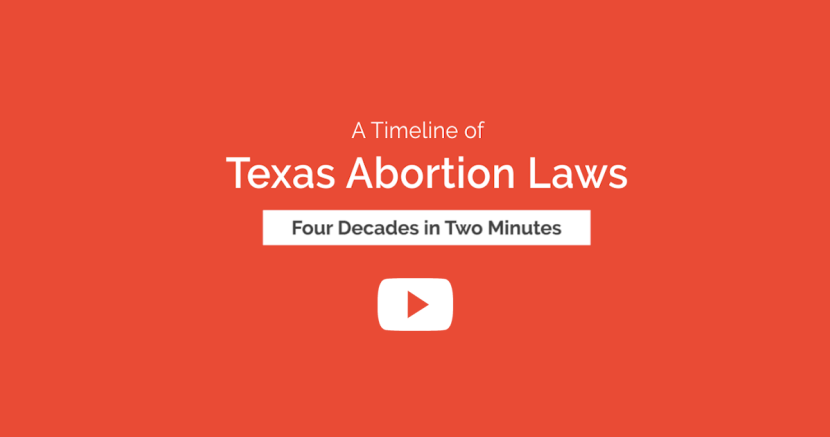 Progress Texas
In the four decades since Roe v. Wade, Texas lawmakers have passed more than 18 anti-abortion measures — turning back the clock on a woman’s right to access abortion care.

Roe v. Wade: All women have access to abortion, and Medicaid covers abortion

Hospitals can refuse to provide abortions regardless of reason.

Only a physician licensed by the state may provide abortion care.

Medicaid cannot cover abortion except in cases of life endangerment.

A woman must wait 24 hours before the procedure is performed.

Doctors are required to give patients government-written materials about abortion, including images of what a fetus looks like at 2 week intervals. Doctors must discuss medical assistance benefits for pre-natal care and childbirth with patients. Doctors must give patients medically-inaccurate information about abortion, including a false link between abortion and breast cancer.

Doctors are required to give patients a state-mandated list of groups for counseling that includes anti-abortion organizations that give women medically inaccurate information about abortion. Tex. Health & Safety Code §§ 171.013-.015.

Abortions after 16 weeks must be performed in a licensed hospital or ambulatory surgical center.

The Department of Health and Human Services is prohibited from contracting with health care providers who perform abortions or who are affiliated with facilities that provide abortion care.

A parent’s written consent must be notarized before a woman under the age of 18 can get an abortion.

The Department of Health and Human Services and its employees are prohibited from from referring women to organizations that provide or “promote” abortion care.

Doctors are required by law to perform a sonogram on a woman seeking an abortion at least 24 hours prior to performing the abortion. The doctor must display the sonogram image to the woman, verbally describe the image, and provide the opportunity for the woman to hear the fetal heartbeat.

Doctors who provide abortions are required to become part of the admitting staff at a nearby hospital. Regulations do not require or provide criteria for hospitals to grant this privilege.

Abortions after 20 weeks are banned, unless the woman’s life or health is at risk or in the case of a severe fetal anomaly.

Judicial bypass, the court process a woman under the age of 18 is required to go through to waive parental consent, is more prohibitive.

Would require state agency rules and planned measures be guided by the principle that life begins at conception.

Would prohibit health insurance plans from providing coverage for abortion care unless the woman’s life or physical wellbeing is at risk.

Would require a woman seeking an abortion to undgo an adoption and parenting resource session prior to the procedure.

Would amend exiting law to include more requirements relating to the minimum standards applicable to abortion facilties.

Would require health centers that perform more than 50 abortions a year to display a sign discouraging abortion in each patient admission area, waiting room, and patient consulting room.

Would remove “severe fetal abnormality” from the exceptions to the ban on abortions after 20 weeks.

Would amend the Texas constitution to “guarantee the right to life” of fetuses and to prohibit abortion to the extent authorized under federal constitutional law.

Would require a physician to provide written notice to the parent or guardian of a woman under the age of 18 at least 48 hours before performing an abortion.

Would require a hospital to keep a pregnant woman on life support in the event she is declared brain dead to allow “the unborn child to mature.” An attorney would be appointed to represent the fetus’s interests in court proceedings.

Would prohibit the Department of Health and Human Services from providing written information that presents abortion as an option for a prenatal diagnosis of Down Syndrome or any other health condition.

Would require a doctor to go a woman a “coerced abortion from” before performing an abortion. The doctor must also verbally inform the woman that a person cannot coerce or force her to have an abortion and that the physician cannot perform the abortion unless the woman provide her voluntary and informed consent.

Would disclose the names of judges who decide on abortion legal proceedings for women under the age of 18.

Would prohibit abortion providers, like Planned Parenthood, and their affiliates

Would require doctors who perform abortion abortions to complete and submit a monthly report to the health department on each abortion performed.

Would create civil and criminal penalities for knowingly performing or coercing an abortion for the purposes of sex selection.

Would change the judicial bypass process by requiring a woman under the age of 18 meet three requirements, as opposed to one requirement, and by prohibiting the appointed guardian ad litem and the attorney ad litem from being the same person.

Would require all sexual education in public schools to include instruction that life begins at conception.

Would give pharmacists the right to conscientiously object to filling a prescription.