2018 May Be the Beginning of "Sooner" for Texas Democrats 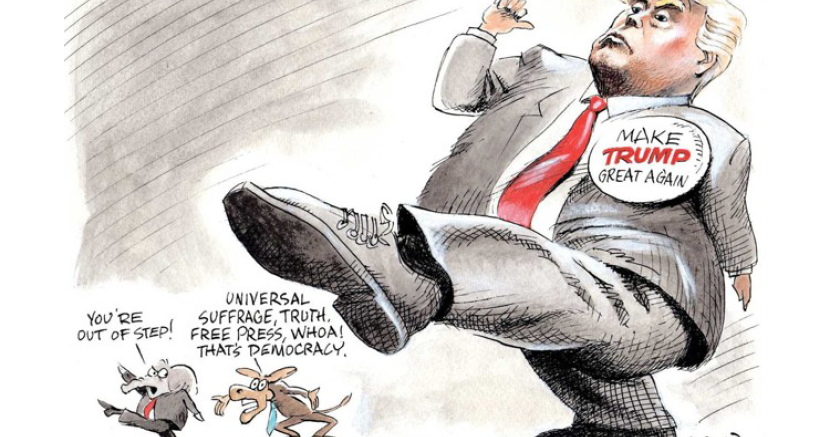 Image Credit
Illustration by M. Scott Byers
Glenn W. Smith
The 2018 general election is, above all else, a referendum on the future of democracy — or whether American democracy even has a future.

Thinking about the political landscape as we leave behind the 2018 party primaries in Texas, our usual little election weather gauges seem inadequate. American democracy is clearly facing an existential crisis. The current presidential administration seems hell-bent on undermining the institutions and laws that are democracy’s foundation. Sad to say, but under Republican monopoly rule, Texas has been the incubator for many of these anti-democratic ideas.

To name just one issue Texas Republicans pioneered, there are the state laws aimed at suppressing the votes of citizens Republicans believe might vote against their power.

Every small effort at change is critical, of course, including attention to local offices and the seats in the Texas Legislature. Still, in conversation with citizens not fully engaged in that planning process, we can’t lose sight of the bigger picture.

This may be the biggest tactical challenge Texas Democrats face in 2018. They must win dozens of local or statewide skirmishes to advance their larger cause, but the larger cause absorbs almost all public attention.

The rule used to be: Don’t nationalize a local election. Today, all elections are nationalized. Experiments with moving municipal elections to traditional, partisan midterm election dates — as has been done in Austin — may challenge the domination of national over local issues. We’ll have to see.

Can Texas Democrats overcome a national/local disconnect? For instance, pundits are quite busy urging Democrats to bring fresh faces to its national leadership. Here in Texas, when Democrats nominate an entire statewide slate of fresh faces, they are asked why there aren’t more known celebrities among them.

The 2018 general election is, above all else, a referendum on the future of democracy — or whether American democracy even has a future. It is no longer much of a secret that a significant number of Americans are captivated by the current authoritarian-style occupant of the White House.

Many of those who belong to Donald Trump’s “base” seem to think universal suffrage itself presents a danger to the lives they’d like to have. Despite the obvious danger, they might opt for something other than democracy if they believe it could get them what they want.

It doesn’t matter whether the current batch of Texas Republican officeholders really believe that or are just pandering to those who do. Either way, they’ve put their hold on power ahead of the health of democracy.

So, what will the 2018 general elections look like in Texas? Between now and then, there will be a lot of talk about the campaign funding advantages enjoyed by Republicans. Many will speak of Texas’ “red state” status as some sort of permanent and absolute quality. It’s not.

It is an odd circumstance that some Texans seem happy enough to sacrifice public education, environmental health, access to health care and transportation needs out of loyalty to their political “team.”

Sooner or later — and maybe 2018 is the beginning of “sooner” — even these Texans will realize that their cars are falling into the same potholes as the “others” they so fear. Maybe they will awaken to the news that their children’s education is suffering, that the air smells bad and the water tastes bad, that they can’t get the health care they want.

They might be asking, why are we having to work two jobs just to keep up with yesterday’s bills?

This year, Democrats will gain seats in the Texas House of Representatives. They might gain a seat in the state Senate. Either one or both could at least help stop the slide into authoritarianism.

What of the statewide offices? The pundits will say Democrats cannot pull off a statewide win right up until the morning after Democrats do. It’s the mirror image of Gov. Bill Clements’ win in 1978, when he became the first Republican governor since Reconstruction. All the “wise owls” of the political class, as Clements liked to call them, were wrong.

We might also recall that in 1982, President Ronald Reagan’s first midterm election year, Texas Democrats swept every statewide office. I know, that was then, this is now. And yet, that was another year in which national events dominated.

This article originally appeared in the Austin American-Statesman. Glenn W. Smtih is a senior strategist to Progress Texas.