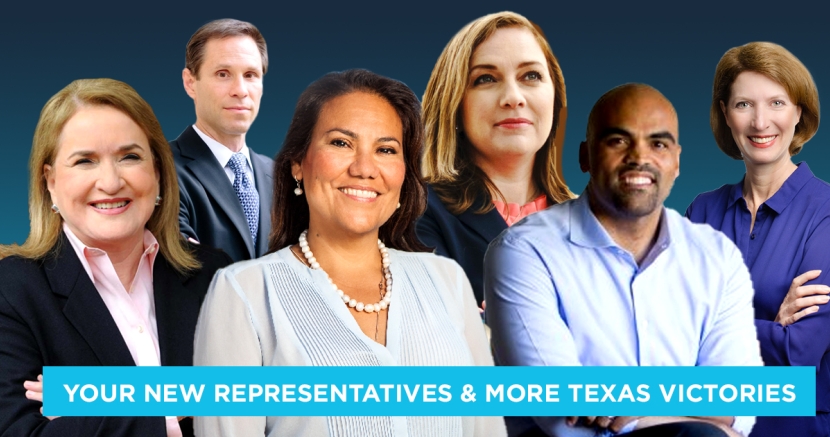 Progressives turned out and voted to shape the future of Texas.

Texas registered voters turned out at a rate of 53 percent for the 2018 midterm, surpassing some Presidential election years and coming close to eclipsing 2016 numbers. Issues like health care, immigration, #MeToo, and equality also drove many Texans to the ballot box for the first time – and once people vote once, they’re more likely to vote again.

We believe Texan Millennials and Gen Xers have the ability to flip Texas, especially if they keep turning out. Suburban counties like Fort Bend, Hays, Williamson, Tarrant are some of the fastest growing areas in Texas and have been red for decades, but on Tuesday, they all went blue.

The rainbow wave hit Texas, and we’re so happy it did. Amazing candidates like Julie Johnson in the Dallas-Fort Worth area, Erin Zwiener in the Central Texas area, and five Harris County judges will continue the fight for equality (and more) in Texas.

“The Year of the Woman” hit with full force, and it’s nowhere near over. Candidates like Beverly Powell says it’s “certainly not a one-time deal.

The “Houston 19” are a group of African American women running for various judicial seats in Harris County - and all 19 won. This marks the single biggest victory for black women in the county's history (and maybe even the state).

6. History is made with Texas’ first Latinas in Congress

Sylvia R. Garcia and Veronica Escobar are Texas’ first two Latinas to be elected to Congress. Garcia, the former State Senator and fierce progressive fighter, hails from Houston; Escobar is a powerful criminal justice advocate who served as County Commissioner and County Judge in El Paso.

An education champion and doctoral student, Aicha Davis is a welcome addition to the State Board of Education and seeks to improve outcomes for Texas students in public schools.

Democrat Diane Trautman is now in charge of administering the voting rolls for 4.7 million Texans.

Overall, there were so many wins for Texas progressives across the state. The future of Texas is bright, and it’s because voters like you. Thank you.