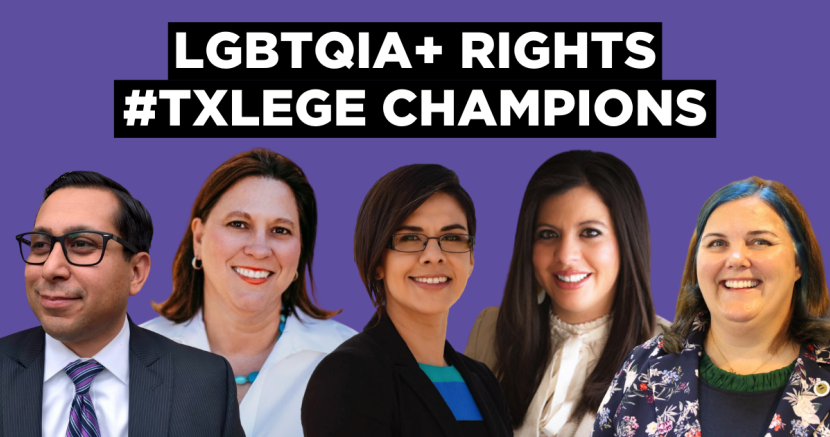 These ten bills written by LGBTQIA+ rights champions in the Legislature would provide long overdue protections for queer Texans.

The passage of the Equality Act in the US House of Representatives last month highlighted the great need for non-discrimination protections for LGBTQIA+ individuals across all sectors, including housing, employment, credit, education, public spaces and federally funded spaces.

At the state level, several progressive legislators have filed bills that would expand LGBTQIA+ rights for Texans across the board. Here are ten of those legislators and their respective bills:

This bill would remove outdated and non-enforceable statutory language in the Texas Family Code that criminalizes LGBTQIA+ Texans and prohibits same sex marriage in order for Texas statute to reflect federal law.

This bill would establish nondiscrimination protections for all Texans in places of public accomation based on race, disability, religion, sex, national origin, age, sexual orientation and gender identity.

This bill would prohibit health benefit plans offered by a public employer from paying for conversion therapy practices seeking to change a person’s sexual orientation or gender identity.

This bill would expand the protections of the Texas Fair Housing Act to include the LGBTQIA+ community, which would prohibit housing discrimination on the basis of sexual orientation and gender identity.

This bill allows HIV screenings to be done as a part of routine blood work. Currently, a patient must opt in to having this test added, and HB 493 makes it so that a doctor will verbally, or in writing, inform a patient that this test will be conducted and allow them to opt out instead of being required to opt in. It also requires physicians to provide resources to health services after a positive diagnosis. Allowing physicians and their patients to have HIV testing done as a part of routine blood work allows for the most successful treatments to take place with an early diagnosis.

This bill would prohibit doctors and surgeons from performing non-consensual sex assignment procedures and treatments on intersex minors. These procedures are medically unnecessary cosmetic surgeries most often performed at an age when an intersex individual is unable to comprehend or consent.

This bill would establish a procedure for correcting names and gender markers on vital records/legal documents. Many members of the LGBTQIA+ community experience bigotry and discrimination in these situations of gender transition and this bill seeks to ease that and also help affirm gender identity.

The work these progressive state legislators are leading is inspiring and optimistic. If passed, these bills would greatly improve the daily lives of LGBTQIA+ Texans across our state.