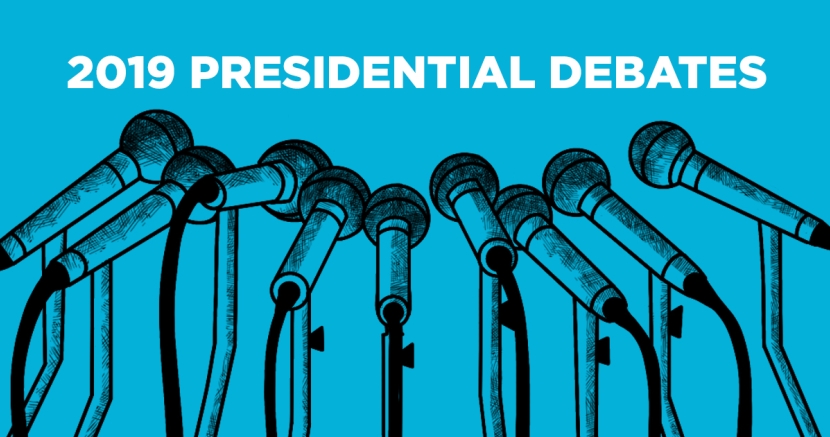 10 standout moments from the June #DemDebate

The biggest challenge for Democratic Presidential candidates is standing out in the crowded field.

In the first of many Democratic Presidential debates, there were a few punches, a few fumbles, and a lot of progressive policies discussed.

It is refreshing to hear candidates speak on progressive issues such as affordable health care, comprehensive and compassionate immigration reform, solutions to climate change, abortion access and inclusivity, and equal rights for all Americans.

Progress Texas live-tweeted both nights, and here are a few key takeaways from the June #DemDebate.

Former Secretary of Housing and Urban Development Julián Castro was the first candidate to roll out an official immigration plan, including decriminalizing migration to the U.S.

Lots of cheers for @JulianCastro for his comprehensive immigration plan at the #ATX @texasdemocrats watch party.

THREAD: For the #DemDebate tonight, we're keeping an eye out for every single candidate's stance on using presidential action to end horrific family separations & #EndTheMachine at the U.S./Mexico border.

2. Speaking about abortion in an inclusive way

Many of the candidates on the first debate night spoke toward their plans to have health insurance cover abortion access, in addition to other reproductive health care needs. But for many Americans, it was their first chance to see a Presidential candidate speak about abortion in an inclusive way.

.@JulianCastro's health care plan would include coverage of abortion, and talks about it as an INCLUSIVE issue that also impacts our trans neighbors. #DemDebate

.@ewarren with a strong stance on protecting abortion access: "I would make certain EVERY woman has access to the full range of reproductive health services and that includes birth control and abortion. It's not enough for us to expect the courts to protect us." #DemDebate pic.twitter.com/JWSfAu06hO

While only about seven minutes on the debate were spent on climate change, many of the Democratic candidates have rolled out plans to combat our greatest existential threat.

Washington Governor Jay Inslee has made climate change the top priority of his campaign, while other Democrats count it among their top priorities. Now, Twitter users are pushing for a climate-focused debate to allow candidates to discuss the nuances of our climate, which disproportionately impacts immigrants, people of color, and lower-income families.

On #ClimateChange, it's good to see #DemDebates candidates making this one of their top priorities. Texans need sustainable solutions to make sure we are safe and able to live our lives, especially after disasters like #Harvey.

Climate change is an immigrant rights issue! Millions of people around the world are being displaced by natural disaster and solutions that help without hurting people are needed to address this mass movement of people! #FreetoStay #DemDebate

On solving the U.S. health care crisis, there were distinct differences in tactics from the candidates. Most notably, Senator Elizabeth Warren and New York City Mayor Bill de Blasio were the only candidates to raise their hands in support of replacing private insurance corporations.

On replacing private insurance, @BilldeBlasio and @ewarren raise their hands in favor. #DemDebate

The debate over how to handle private health insurance is emerging as a dividing line in the first 2020 #DemDebate https://t.co/8uy0LRV3be

The candidates got a few jabs in on Trump, and Minnesota Senator Amy Klobuchar had maybe the best comeback of the night.

“I don’t think we should conduct foreign policy in our bathrobe at 5 in the morning” is an under-appreciated #DemDebate highlight from @amyklobuchar.

California Senator Kamala Harris’ moment with former Vice President Joe Biden is one of the most memorable of the second debate. Harris brought up Biden’s history with segregationist senators.

.@KamalaHarris brings up @JoeBiden’s comments on segregationist senators and his history.

Says this is a conversation that needs to be taken seriously and holds Biden accountable for his past. #DemDebate

When asked if their health care plan would provide coverage for undocumented immigrants, all 10 candidates on the stage raised their hands (though some more eagerly than others).

All candidates raise their hands to say their health care plan would provide health coverage for undocumented immigrants. #DemDebate

All Democrats on the stage raised their hands when asked if their health care plan would offer coverage for undocumented immigrants #DemDebate2 pic.twitter.com/oZg4epKIgy

3. An end to gun violence

Gun reform is necessary for people to feel safe in our country again, and several candidates made it one of their top priorities of their campaign.

.@PeteButtigieg: “If more guns made us safer, we’d be the safest country on Earth.”#DemDebate

Thank you to @ericswalwell and @kamalaharris for including ending gun violence in their answers to what they would tackle first if elected to office in 2020. #DemDebate #DemDebate2

Many candidates are for making college more affordable, but their answers and tactics for doing so differ greatly.

@PeteButtigieg: "College affordability is personal for us."

But he doesn't believe that college should be free for all. Instead, Mayor Pete says that not only should it be affordable to attend college, but affordable to decide not to as well.#DemDebate

“Beating Trump” was another theme of the Democratic Debates, and candidates talked about their plans to undo many of Trump’s harmful policies on Day 1.

.@KamalaHarris says she will continue to hold Trump accountable and promises to be a president that leads w/ dignity, honesty, and helps American families prosper. #DemDebate

That's a wrap. There were 52 total mentions of Trump on Night Two of the #DemDebate (compared to 35 Trump mentions on Night One) https://t.co/0CcBiJHVcw pic.twitter.com/VA2T2F6afV

The next Democratic Presidential Debate will be on July 30 and 31.