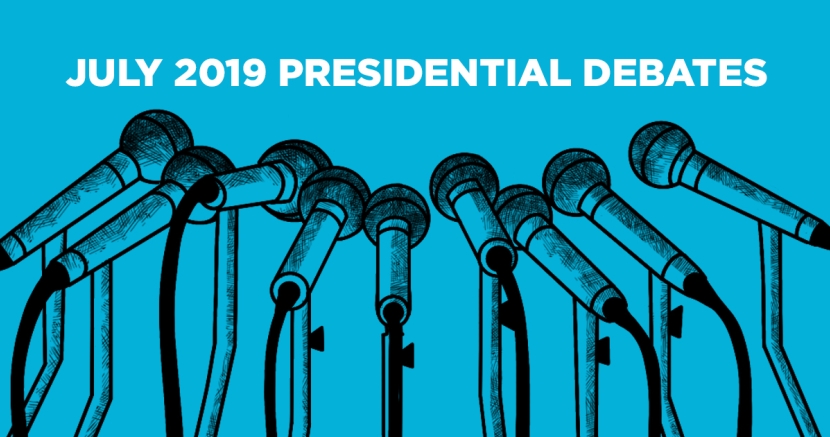 10 standout moments from the July #DemDebate

After this debate, the field of Democratic Presidential candidates will slowly narrow down.

In the second of many Democratic Debates, candidates sparred on issues like health care, immigration, and climate change, and Texans were watching.

While the night’s questions were framed by Republican talking points and abortion access was never brought up, we did hear a few important insights from key candidates. Here are some of our favorite moments:

1. Texas is a battleground state.

Beto O’Rourke broadcasted what we’ve known for a while: Texas is a battleground state in 2020, and candidates need to pay attention.

A recent poll this week (the fourth one in a row) shows Democratic candidates leading or tied with Donald Trump in Texas. Republicans are scared.

Shoutout to @BetoORourke for bringing up Texas.

We've said it once and we'll say it again: Texas is a battleground state!

2. We’re fighting FOR something.

Not only are we fighting to kick Trump out of office, but Texans are backing candidates who are steadfast in their values and ready to fight for us.

.@ewarren: I don't understand why anyone would run for president to talk about what we can't do and can't fight for. I'm ready to fight. #DemDebate #DemDebateTX #2020Elections

.@PeteButtigieg: Stop worrying about what the Republicans will say. They’re gonna call us socialists either way.

We agree. Americans want a candidate who lives by their values and focusing on the right policies. #DemDebateTX #DemDebate #2020Elections

3. The candidates are focusing on health care.

Voters have said it loud and clear: We need to expand health care access! We need candidates who are for affordable health care options for all people.

The bottom line: Americans are paying TOO MUCH for health care. Health care is a human right and we shouldn't have to go into debt in order to take care of ourselves.

We need a candidate who expands access to affordable, quality health care for everyone.#DemDebateTX #DemDebate

WATCH: Sanders and Ryan face off on health care at the #DemDebate

Sanders: "Medicare for All is comprehensive—it covers all healthcare needs..."
Ryan: "But you don’t know that—"
Sanders: "I do know it, I wrote the damn bill"

4. We need our climate crisis addressed.

Here in Texas, communities are already being hit by the effects of our climate crisis. Presidential candidates must not only recognize this, but be willing to take action on day 1.

Next topic: the climate crisis.

We need a president who recognizes the urgency of climate change and makes the shift to clean energy a priority for our country.

This issue determines the future of our planet and cannot be taken lightly.#DemDebate #DemDebateTX #2020Elections

We invited progressive advocates, candidates, and organizations across the state to join us in offering their “Texas Take” during the debates. Here’s what they had to say.

Voters have said it loud and clear: We need to expand health care access! We need candidates who are for affordable health care options for all people. #DemDebate #DemDebateTX #HealthCareVoter @ProgressTX

Voter data from 2018 showed that young voters, age 18-29 made up a larger voter registration block than any other age group in Texas. In 2020, young people are going to flex that electoral power for candidates who stand with us. #DemDebate #DemDebatetx #Elections2020 pic.twitter.com/NtA7OkH6qq

Texas is the biggest battleground state. 1) There is a thing called data, happy to share some. 2) Chat with your fellow journalists, they call us every day. 3) We are going to make eat this tweet, your choice of BBQ sauce. #txlege #demdebate #demdebateTX https://t.co/Vm2dyQFNyi

6. More plans for health care for all.

While the Affordable Care Act has helped one million Texans, conservatives are still trying to dismantle the ACA with no replacement. People deserve access to care.

Texas has the highest percentage of uninsured of any state. We need to expand Medicaid. #DemDebateTX #DemDebate #CNNDebate

Message framing is so important, and we need a Democratic nominee who knows when to call something out.

Our criminal justice system was never designed to work for ordinary Americans. It has incarcerated masses of people, mostly from communities of color. We need a president who believes in complete criminal justice reform for the benefit of our communities.

The criminal justice system has incarcerated masses of people, mostly from communities of color. #DemDebate #DemDebateTX

9. A conversation about the wage gap that still exists in America.

Let's be clear: The #WageGap isn't created equal. Here's how the gaps break down.

.@KamalaHarris coming through with the actual pay disparity stats for women of color! #EqualPayforEqualWork #DemDebateTX #TYDDebates

Thank you to the folks who shared their Texas Takes during the #DemDebates! We’ll see everyone in Houston in September for the next debate.

GOP leaders in Texas are doing everything they can to prevent people from voting.

They are the standing between us and full representation in our state. #DemDebateTX

I don't need the author of the crime bill talking about criminal justice reform either. Come on, @JoeBiden. #DemDebate2 #DemDebateTX pic.twitter.com/4uhQsH5HqZ

Julián Castro is taking the radical tact of speaking reasonably and clearly on health care without getting lost in the weeds. #DemDebateTX

Say it louder for the folks in the back!!

FAMILY SEPARATION WILL CONTINUE UNLESS WE END THE PROSECUTION AND CRIMINALIZATION OF IMMIGRANTS.

And by the way - family separation continues in our criminal justice system every day. #EndMoneyBail#DemDebateTX https://t.co/RzIXCGxd5R

Petition to have Beyonce moderate the next debate in Houston #DemDebateTX

Redistricting Update: What do the new gerrymandered Texas maps look like?
3 days ago

PODCAST: Redistricting and the 3rd Special Session
4 days ago