“No More Cane on the Brazos” or Affordable Housing in Austin 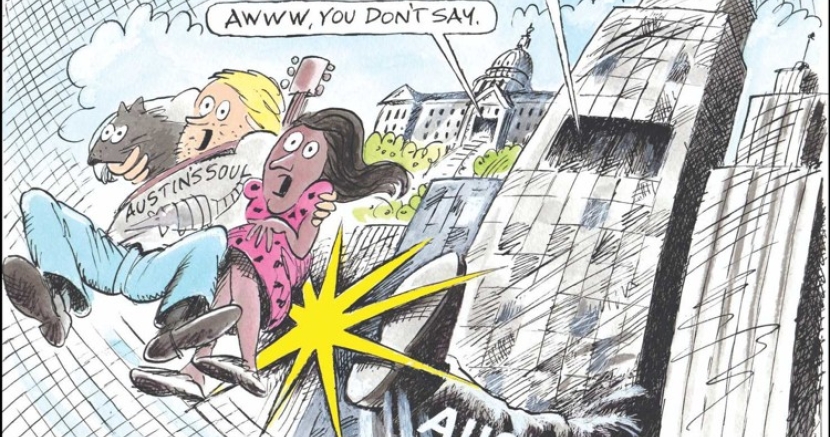 How hard is it to find affordable housing these days? Let’s start in Sugar Land, where the old bones of more than 30 newly disinterred, turn-of-the-20th-century prison inmates can no longer afford their final resting places.

The bodies have to move to make way for the local school district’s “new career center.” Figures. The poor souls no doubt finished their careers as forced labor convicts, the sort who sang as they worked, “No more cane on the Brazos,” where you can “find a dead man on every road.”

In Austin, as in so many urban areas in Texas and around the country, people are experiencing a so-called “housing cost burden.” That’s think-tank jargon for “the rent is too damn high!” We’re all going to need new careers if we want to keep living in the city.

Here’s Austin, a prosperous city experiencing a building boom at a time of full employment and a healthy economy. And people can’t afford to live here. This isn’t what we meant by “Keep Austin Weird.”

The crisis is hitting the middle class, minority neighborhoods, and enclaves of musicians and artists. In other words, it’s the soul of the city that’s hurting. Good luck to the rest of us who will either save its soul or try to thrive without it.

Who do we blame? What to do we do?

First, let’s recognize that the local affordability crisis is part of the national inequality crisis. It’s no longer the rich get richer. The multiple-home rich already got richer while the middle-class and poor – those who seek only one modest home – are getting shooed from town away all the way to their graves.

These large-scale economic forces are exacerbated in places like Austin, where unrealistic, no-growth advocates think, “If we don’t build it, they won’t come.” Well, Austin didn’t build adequate roads, public transportation or housing — and the people came anyway.

No, the no-growth attitude didn’t stop the already-affluent from moving here to enjoy the Austin lifestyle they’d heard so much about. But it is forcing the less affluent — the soul of the city, as noted above — to head for the hills.

Well, not the hills. Those are already full of McMansions. Think of the Balcones Fault as a “big, beautiful wall” — so to speak — keeping the less fortunate to the flatlands through, uh, no fault of their own.

We can’t let state government off the hook either. Many here in Austin and other urban areas of Texas will point to skyrocketing property taxes as a culprit in the affordability crisis. Well, those local rates have gone up because the Republicans in charge of state government have grossly underfunded public schools, abandoned public health care to local taxpayers and failed to meet infrastructure responsibilities.

The unholy alliance of no-growthers and conservative “aginners” appears to be breaking down under the weight of overburdened infrastructure, overcrowded streets and unaffordable housing.

Also, both the city of Austin and Travis County appear to be moving in the right direction. The city’s Strategic Housing Blueprint is bold and thorough. Of course, it’s just a blueprint — and we can’t build homes or drive on blueprints. But it’s a vision, and a good one.

As noted, Travis County is doing its part. For instance, the Commissioners Court in 2016 approved creation of Public Improvement Districts to prepare for growth with attention to parks, mass transit, employment opportunities and affordable housing.

We’re all going to have to fight for changes in state leadership and state law, though there’s plenty to do locally in the meantime.

In the end, it’s up to us to save the soul of the city. Recent election results show we’re ready to take the hammers in our hands and build an urban area for all of us. It’s only about saving our soul. No pressure.