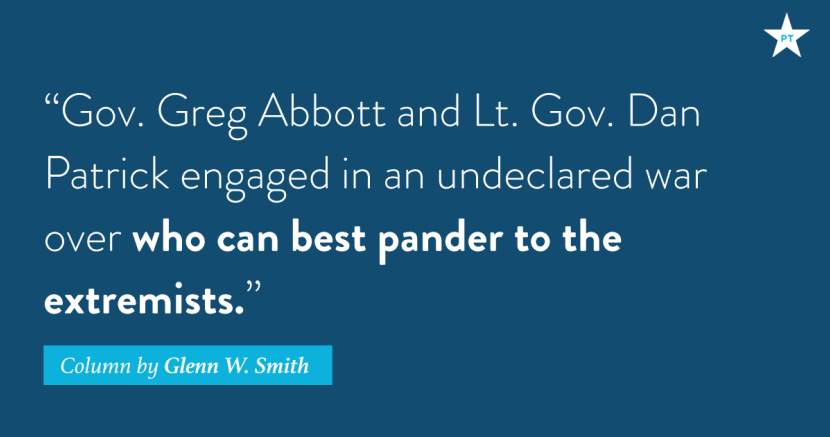 The anti-gay marriage movement is just one way today’s Republican leadership is trying to divide America by law.

The all-Republican Texas Supreme Court, apparently alarmed at political threats from the far right, will rehear a case that would make second-class citizens of public employees in same-sex marriages.

The Court rejected the Houston case last September by an 8-1 vote. Then came a flood of emails from members of sects once part of a religion of love. The emails more or less threatened to unseat the judges unless they voted to diminish the lives of the targets of their hatred.

Gov. Greg Abbott and Lt. Gov. Dan Patrick, engaged in an undeclared war over who can best pander to the extremists, filed briefs urging the court to reverse itself and take up the case. Attorney General Ken Paxton did, too. He wasn’t about to miss the party.

Keep in mind that the U.S. Supreme Court has already ruled unconstitutional laws that treat same-sex married couples differently from others. Such laws violate the Constitution, particularly Fourteenth Amendment guarantees of due process and equal protection, the Supreme Court said.

Today’s Republican Party leadership seems to be particularly irritated by the existence of due process and equal protection guarantees in the Fourth, Fifth and Fourteenth Amendments. They get in the way of what has become their obvious efforts to put into law class-or caste-or race-or gender-based divisions among Americans.

The recent anti-Hispanic moves from Donald Trump’s administration to imprison and possibly deport brown-skinned people without probable cause, court orders or due process clearly violate the Fourth and Fifth Amendments. Nothing is needed but the whim of the Deportation Force. Incidentally, should those amendments fall, the loss threatens all of us. Consider this scenario:

ICE: Prove you are a citizen who hasn’t committed a crime.

ME: Well, here’s my driver’s license.

ICE: Looks fake. And it’s not enough. You’re under arrest.

Right now, if the Trump anti-immigration orders stand, that scenario is not far-fetched. And by the way, should it happen to you, your family, friends, lawyers and others may have no idea where you have gone or what’s happened to you.

All this might make clear Abbott’s motivations for a “Convention of the States” to write a new U.S. Constitutional. Does it have to do with dividing Americans by class, income, gender, race, and sexuality? Is freedom little more to Abbott, Patrick and others than the freedom to discriminate against those they want to discriminate against?

The question is answered with an emphatic “Yes” in the Motion for Rehearing filed in the same-sex marriage case with the Texas Supreme Court. It actually attacks the U.S. Supreme Court for continuing “to use its power to advance the sexual revolution.”

It is difficult to see Justice John Roberts’ court as a black-robed version of Woodstock organizers, but there you have it.

Also, with regard to their anti-sexual revolution argument, the Bill of Rights was adopted in 1791. The Fourteenth Amendment was ratified in 1868. I guess they could argue the latter was a product of the ‘60s, just another century’s ‘60s.

The motion also relies upon the dangerous, anti-democratic and upside-down argument that the First Amendment was intended to allow religious sects to discriminate at will against those who don’t look like them or believe as they do. This is little more than an argument for “Jim Crow, June Crow, Jose Crow” laws that make the doctrines of a religious minority supreme over all of us.

The building of Great Walls in American law makes a mockery of the Shining City on a Hill. The hill becomes a pyramid scheme of permanent divisions. No part of it would shine.

It must be noted that Trump and other anti-Islam agitators are trying to ban Muslim immigrants by arguing that they want to make their doctrines supreme over all of us. The Twilight Zone discussion seems to be not about religious liberty at all, but about what religious sect our freedoms will be sacrificed to.

Of course, America is not the least bit threatened by Sharia law as some paranoids worry. It is, however, threatened by “Jim Crow, June Crow, Jose Crow” laws that undermine the very foundations of American democracy.

Where does all this hatred come from? How is it that Texas Supreme Court justices are asked to bow down to it? Let’s hope the justices find the courage to resist. They will hear arguments in the marriage case March 1.