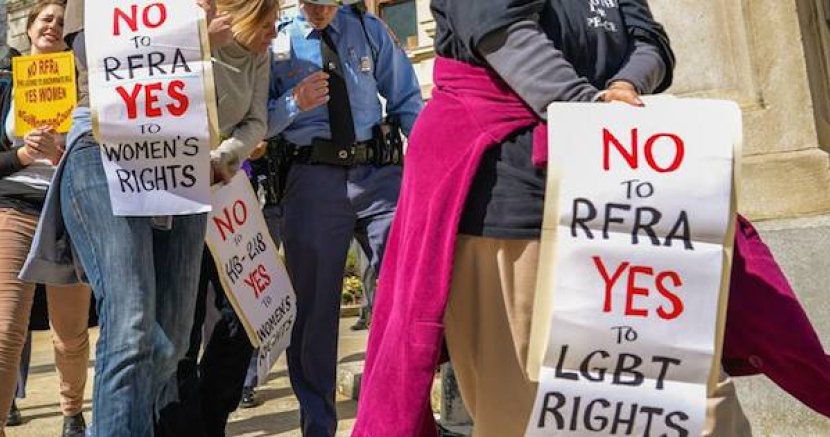 Today, the Fifth Circuit Court of Appeals will hear arguments in East Texas Baptist v. Burwell, a case over whether religious non-profits can use the federal Religious Freedom Restoration Act or “RFRA” to block their employees’ access to contraception under the Affordable Care Act. As state legislatures across the country, including Texas, come under fire for expanding RFRA laws to allow individuals and businesses to use religion to justify discrimination, this case highlights the dangerous impact broadening religious exemptions could have on Texans’ access to reproductive health care.

Rebecca Robertson, Legal and Policy Director of the ACLU of Texas:

“We are dismayed by this reckless movement to transform RFRAs into weapons. The question in each of these recent RFRA debates is whether, in order to respect religious liberty, we must allow people of faith to impose their personal beliefs on those who may not share them. This contraception case, where the third parties at issue are women and their families, shows why the answer is clearly no. ”

Across the country, hospitals, insurance companies and pharmacies are discriminating against women by denying basic care—like birth control, emergency contraception and abortion—in the name of religion.

“Allowing employers to impose their religious beliefs on the people who work for them turns the concept of religious freedom upside down. This case offers a clear example of how so-called ‘religious freedom’ laws can be abused to limit the freedom of others to make decisions based on their own deeply held beliefs. While we should always protect religious liberty, we should not allow some to impose their religious beliefs on people who don’t share those beliefs.”

"Texas women are frequently at risk of losing access to birth control, routine well-woman exams, breast and cervical cancer screenings, and mammograms. This legal challenge is just another attempt to limit affordable health care and will hurt Texas women and families."

As part of the Affordable Care Act, the federal government issued a rule that requires health plans to cover contraception without a co-pay. Non-profits with religious objections to covering contraceptives can opt out, at which point the government arranges for employees to receive contraception coverage at no cost to and without the involvement of the employer. Several non-profits are challenging the opt-out under RFRA, arguing that even opting out burdens their religious liberty. If these claims succeed, women could be denied coverage because of their employers’ religious views.

Freedom of religion is one of our most fundamental rights as Americans, protected in the Texas and U.S. constitutions and by state and federal statute. The existing Texas Religious Freedom Restoration Act (RFRA) bars government actions that “substantially burden” the free exercise of religion. Passed in 1999, this law has worked well to protect religious freedom for all Texans for 15 years. It includes carefully crafted provisions that prevent abuse of the law. Two state constitutional amendments proposed in the 2015 Legislative Session—SJR 10 by state Sen. Donna Campbell, R-New Braunfels, HJR 125 by state Rep. Matt Krause, R-Fort Worth—would sweep away this language. The broader language in these amendments would allow individuals and organizations to impose their personal religious beliefs on customers, employees, and patients who may not share them.

Texas Republicans are holding our teachers hostage
4 days ago

Schoolhouse blues: The pandemic and public education
1 week ago