Ketanji Brown Jackson is a justice for our future 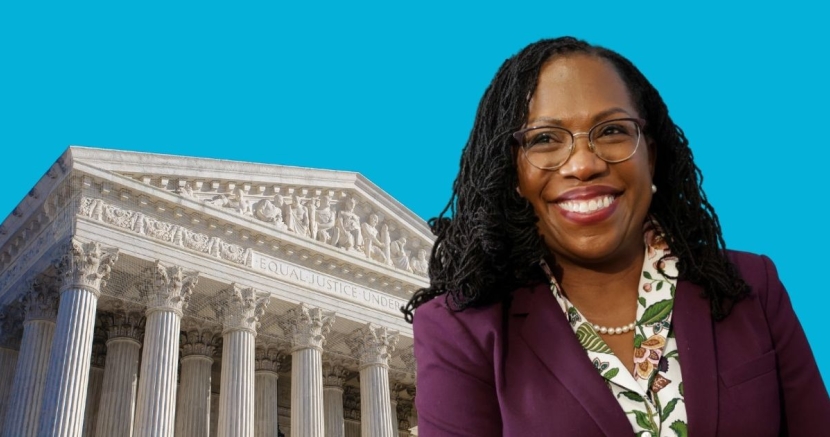 Arabella Cadena
It’s official, Ketanji Brown Jackson will be the first Black woman to serve on the Supreme Court.

The Supreme Court was founded in 1789. In 233 years, Justice KBJ will only be the third Black person and the fifth woman to be appointed to the Supreme Court. That’s 233 years of privately educated heterosexual white men making decisions on issues that they can’t even begin to comprehend—segregation, voting rights, and abortion just to name a few.

Research shows that not only does life experience shape how judges interpret the law but that a diverse bench helps instill trust in the justice system among under­rep­res­en­ted groups. We really don’t need research to tell us that a bench that fails to reflect the public it serves is guaranteed to fail.

The appointment of Justice Jackson to the Supreme Court brings the United States one step closer to true equal justice under law. Justice Jackson has made clear her commitment to improving the justice system for the better. During her confirmation hearing she declared:

"I stand on the shoulders of many who have come before me, including Judge Constance Baker Motley, who was the first African American woman to be appointed to the federal bench and with whom I share a birthday. And like Judge Motley, I have dedicated my career to ensuring that the words engraved on the front of the Supreme Court building — "Equal Justice Under Law" — are a reality and not just an ideal.”

Justice Jackson emphasizes the historical commitment of Black jurists and lawyers, like Judge Motley, to equal justice under the law. Judge Jackson’s brings the lived experience of being a Black woman in America, a mother to two daughters, a daughter of two public school educators, a public high-school graduate, a second-generation college graduate, a family member to law-enforcement officers, a niece to a victim of mass incarceration, and so much more. The eminently qualified Justice Jackson will be the first Black woman to serve on the Supreme Court and her future rulings will ensure that while the first, she will not be the last.

In addition, Justice Jackson brings to the bench a stellar professional lived experience. She is one of the most qualified and professionally diverse people to sit on the Supreme Court. She is the first public defender to serve on the court in over a generation, the last being Justice Thurgood Marshall. Her experience as a public defender is indicative of her commitment to equal justice under law. The right to a lawyer for all individuals accused of criminal behavior is enshrined in the Constitution. Public defenders play a vital role in the legal system, in fact without them we simply would not have one. Justice Jackson's background as a public defender has given her something that other Supreme Court justices with corporate attorney backgrounds are sorely lacking—the firsthand experience of witnessing how the legal system interacts with real, everyday people.

The impacts of Jackson’s professional and personal backgrounds can be seen in her work. For example, during her time as the Vice Chair of the U.S. Sentencing Commission, the guideline range for crack-cocaine offenses was reduced. Her resume also boasts a Supreme Court clerkship with Justice Breyer, experience as a corporate attorney, a judge on the U.S. District Court for the District of Columbia, and a judge on the U.S. Court of Appeals for the D.C. Circuit.

Newly confirmed Justice Jackson won’t alter the current make-up of the conservative supermajority Supreme Court. She completes a powerful trio, joining Justices Elena Kagan and Sonia Sotomayor. We can look forward to many powerful dissents from Justice Jackson, dissents that will become the roadmap to a more just future. There is a history of dissents shaping the majority opinions of the future.

That said, we also look forward to a day when Jackson is part of the majority on the Supreme Court, ruling on issues like abortion rights, voting rights, and racial justice — all freedoms under attack in Texas that the Court’s conservative justices have turned their backs on.

Justice Ketanji Brown Jackson is the future of our nation, and we can’t wait to see her on the Court.