Who is responsible for the mass killings? 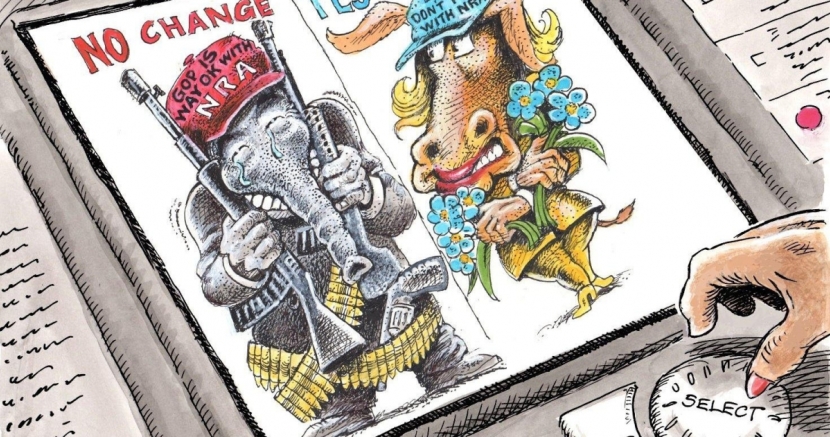 Glenn W. Smith
Perhaps if we glanced down and saw the string that traces the trajectories of the bullets back to our hands about to cast our ballots, things would change.

At crime scenes, they call it “stringing,” using wire or string to trace the trajectory of a bullet back to its source, the position it was fired from. Using a little imagination in the case of recent mass killings with assault weapons, we find the string extends beyond the shooter to the politicians and gun lobbyists who helped arm him.

The gun lobby has over the years successfully intimidated politicians who believe their own fortunes are more important than the fate of those gunned down with weapons of mass destruction. They pose as champions of the Second Amendment, but it’s all about money: the gun industry wants to sell more guns; the politicians want the money to enhance their power and prestige.

Returning to the thought experiment above, if we extend the string further we find the source to be the bank accounts of the weapons industry and their political lackeys.

I grew up in Texas, and that meant I grew up hunting with my father and brothers. I was a good shot with a rifle, but less than competent with a shotgun for some reason. I treasure the memories of those hunting trips. My father taught us to love the land, to respect the objects of our hunt and, above all, to be committed with every breath and step to gun safety. Violate any of the rules, and the hunt was over.

Somewhere along the way my father acquired a chrome-plated .357 magnum. After our house was burglarized one night as we all slept, he sold the gun to the investigating police officer. He explained that had he awakened, he might have used it to kill someone over a couple of bucks.

Texans have gunpowder in their blood. Guns play a role in our unique history. They are embedded in our culture. Like football. There’s a difference, though. It’s hard to kill someone with a football.

I have asked a lot of people in the aftermath of the El Paso terror attack whether they need or want assault rifles or high capacity magazines. All of them looked at me like the question was crazy. All of them said no.

Still, many say they doubt assault weapons will again be banned, as they were from 1994 to 2004, when the prohibition was allowed to expire. The money and power opposed to such actions are just too much to overcome.

At this point, our thought experiment touches a nerve. We find the string doesn’t actually end in the bank accounts of the gun sellers and the politicians. It extends all the way back to ... us.

Perhaps if we glanced down and saw the string that traces the trajectories of the bullets back to our hands about to cast our ballots, things would change.