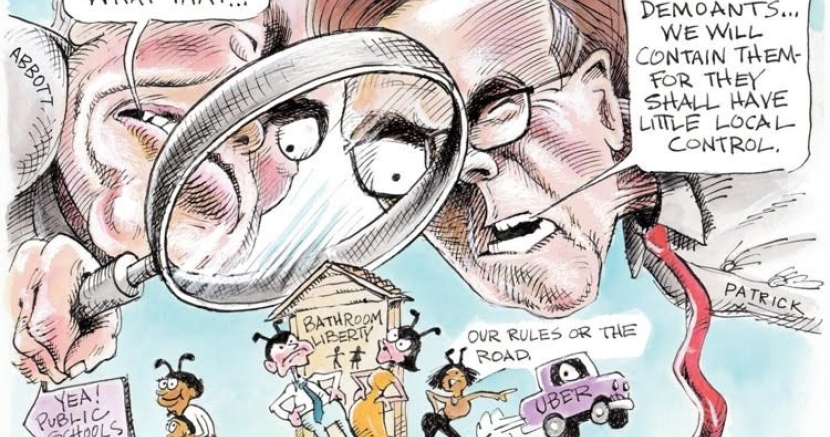 Who’s the boss? A Fight for Final Say

A troubling marker of this overheated political era is our confusion over the relative power of various levels of government. Collectively, we sound a little like the old comedy duo Abbott and Costello arguing about “Who’s on first?”

Do we favor the level closest to the people: city and county governments, school boards, hospital and utility districts? Or are we best guided by leaders down the road in state capitals, a level above our local governments? Is the federal government the best guarantor of our freedoms?

As far as Texas’ current state political leadership is concerned, the answer is clear. Gov. Greg Abbott and other conservative leaders decry both local and federal governments. With a kind of institutional narcissism, they believe state government should reign supreme.

Local leaders make solid arguments that they are best situated to serve the needs of their communities. Their decisions are more visible to voters — and so they are more accountable.

Federal government leaders, of course, can make the convincing case that the U.S. Constitution’s Article VI actually contains a federal Supremacy Clause that gives a good balance of power to the feds.

Gov. Greg Abbott and the state’s Republican leaders seem hell-bent on undercutting local authority. “Local control” was once sacred to conservatives. What changed their minds? Growing progressive leadership in our urban centers — that’s what changed.

Abbott has gone so far as to recommend sweeping legislation that would make it clear that state government pre-empts local ordinances and regulations. Such a law would more or less make your local government a state agency under the governor’s control.

Raise your hands if you think Abbott — or any governor for that matter — cares about the potholes in your streets? Thought so. No, it’s just that Republicans believe they must neutralize growing Democratic strength in local governments. Their solution: Strip authority from local governments.

There are other efforts underway in the 2017 Legislature’s regular session that would undermine local authority. One caps local tax appraisals, a move to limit local government in its effort to replace greatly diminished state funding of critical services.

Following Austin voters’ demand that ride-hailing companies Uber and Lyft adequately screen its drivers, there’s a legislative effort to overturn the city’s 2016 referendum. There’s an additional issue involved in this: corporate legal transcendence of government at any level — but that’s another story.

There is of course the so-called “sanctuary city” controversy. The Donald Trump-led federal government and state Republican leaders demand that local law enforcement ignore constitutional protections against unlawful imprisonment and jail folks based on suspicions rather than probable cause, warrants or court orders. In this case, locals can be so fussy about the Constitution.

“Who’s on first” arguments about who holds power over whom are, of course, nothing new. Still, were we naive to believe there was once a shared concern for the health of our democratic institutions that rose above our individual political disagreements?

Abbott is spearheading a movement to rewrite the U.S. Constitution, giving his level of government supreme control. Even a neutral observer might conclude his effort was about guaranteeing power to his own political faction rather than striking a healthy balance of power. Further evidence for that view is available in the recent spate of voter suppression laws and the extreme gerrymandering of representative districts.

James Madison, defending the need for balances of power among branches and levels of government, wrote that the “control of the violence of faction” was a primary strength of a “well-constructed Union.” We should attend once again to Madison’s advice.