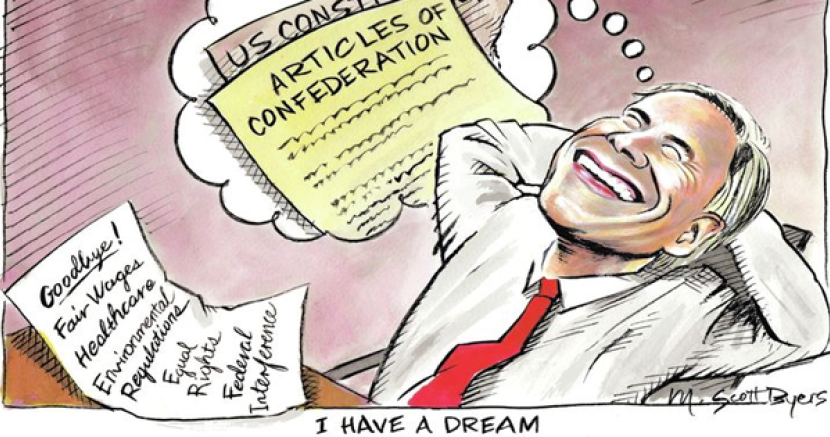 What would Texas be like under Abbott’s disunion constitution?

Gov. Greg Abbott wants to radically alter the U.S. Constitution. He’s calling on the required two-thirds of the states to petition Congress for a constitutional convention. If taken seriously, Abbott’s nine proposed amendments represent a roadmap to disunion and dystopia.

In some ways, Abbott’s plan represents a return to the old Articles of Confederation, replaced in 1789 by the U.S. Constitution when it became obvious that the Articles could not protect the security and economic health of the states. In other ways, Abbott’s plan resembles the 1861 Constitution of the Confederacy — especially in its radical limits on the federal government.

Progressives might welcome a constitutional convention. How about an amendment calling for automatic, universal voter registration? We could abolish gerrymandering of congressional and statehouse districts. We could also reduce political corruption by prohibiting private and corporate campaign spending.

Just in case, though, we should look closely at the consequences of the Abbott plan.

As attorney general, Abbott filed 31 lawsuits against the federal government. The future Abbott sought for Texas through legal action is the same future he is pursuing through a radical rewriting of the U.S. Constitution. Those lawsuits, and his public actions and comments on other key issues, give us a clear picture. What future does Abbot want for us?

Let’s begin with our economic opportunities. It would remove federal authority over any activity that occurs wholly within one state. Goodbye fair wages in a state already known for its extreme wage suppression. Abbott has said he would leave wage levels to the market. In fact, in the text of his plan, Abbott uses the U.S. Supreme Court’s 1937 decision upholding a state minimum wage as a key example of federal overreach.

What about health care? Abbott sued to overturn the Affordable Care Act. And he refuses to make Medicaid more available at no cost to the state. Health care reform reduced the number of uninsured here by 700,000. Abbott’s plan gives states several ways to undo or ignore federal laws, so goodbye health care reform. Those 700,000 people would probably kiss their health insurance goodbye. Millions more could lose insurance coverage through exclusions for pre-existing conditions. And even today, Texas continues to lead the nation with more than 5 million uninsured.

How will our environment do under Abbott’s disunion constitution? He’s sued the Environmental Protection Agency over nearly every step it has taken to protect the environment. For Abbott, clean air and water are so yesterday.

And what about federal protection of historic minorities, including women, African-Americans, Latinos, Asians and others? Abbott’s nine proposals — which taken together limit the authority of the president, Congress, the federal courts, and federal agencies — will surely diminish equal opportunity in education, employment and political representation. We know where Abbott’s coming from: He’s opposed the Voting Rights Act, defended voter suppression laws and opposed Houston’s equal rights ordinance.

So what’s it look like? Wages so meager families struggle if they survive at all. Millions doomed to poor health and early death for lack of health care. Bigotry and discrimination return to pre-Civil Rights Act levels. Our environment goes the way of China as air and water regulations are diminished and we live in an environment of killing smog and dirty water. Voting is so restricted we can’t rise up and change a thing.

Abbott’s plan leads to more than disunion of the states. It is a traveler’s guide to a science fiction-like dystopia.

This was article originally published in the Austin American Statesman. Glenn W. Smith is Director of the Progress Texas Pac.

Remove every barricade
4 days ago