What the Texas Legislature Didn't Do for Medicaid Expansion 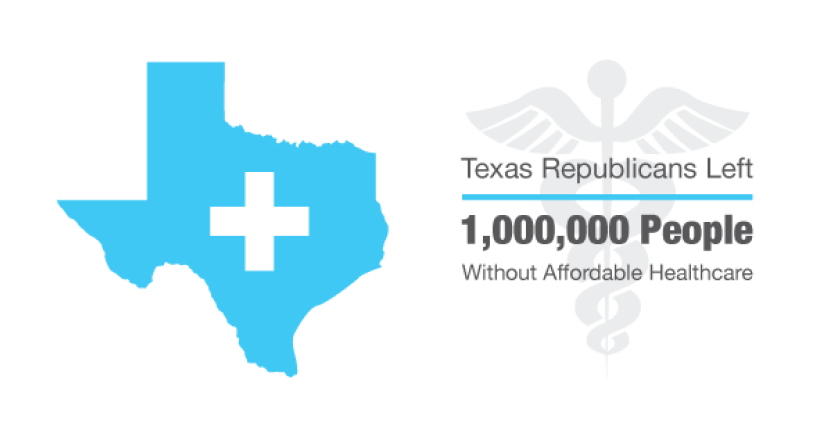 The Texas Legislature finished up this week having done absolutely nothing to advance Medicaid expansion in Texas.

It wasn't for a lack of trying. Democratic lawmakers championed Medicaid expansion all session long:

The case for Medicaid expansion is still clear. Drawing down as much as $100 billion in Texas taxpayer dollars to provide coverage for well over a million Texans is a great deal. Other states are realizing real budget savings after they've expanded Medicaid. Dozens of chambers of commerce endorsed coverage expansion, both for the job creation potential and the reduction in uncompensated care costs hospitals and taxpayers have to cover.

In the end, the GOP refused every proposal for coverage expansion - even the specific proposal the GOP said was necessary to expand Medicaid.

Our advocacy work marches on - literally. Advocates from Texas are currently on a two-week walk from North Carolina to D.C. to help raise awareness about coverage expansion. We'll have more on their march next week.

For now, here's a look at just a few other good write-ups about how the consequences of the Legislature doing nothing to expand Medicaid.

Editorial: Refusing Medicaid expansion has consequences
"Held hostage by lawmakers afflicted with extreme ideological sclerosis when it comes to anything related to the federal Affordable Care Act, the issue didn't even come up in the just-concluded legislative session."

Texas Loses Billions To Treat The Poor By Not Expanding Medicaid, Advocates Say
"The problem is in hating the Affordable Care Act, the state is leaving on the table as much as $100 billion of federal money over 10 years - money that would pay for health insurance for more than a million of its working poor. This is driving many in the state's business community bonkers."

Political posturing on Medicaid is bad for Texas
"In Texas, it seems that it is more important to hate the ACA than to provide for its residents and business owners. It's better to decry the working poor and place barriers to wholeness in their paths. This bluster is bad for Texas."
Tags
Health Care
TX Lege 15
Greg Abbott
Dan Patrick