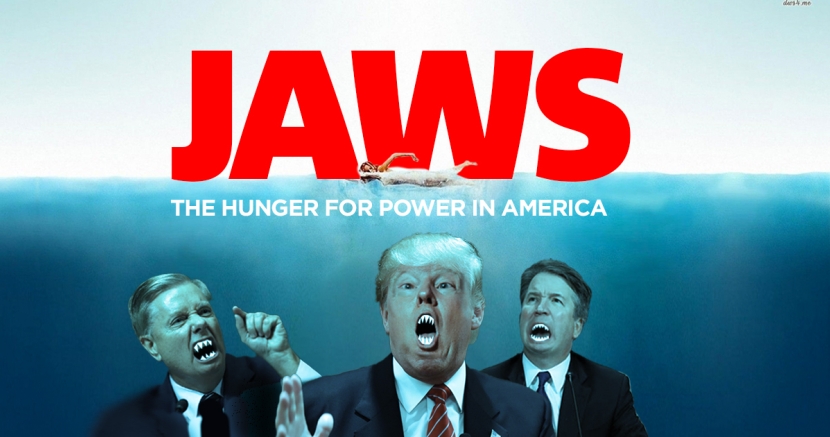 Is American democracy strong enough to survive its demons?

Remember the scene in the movie, "Jaws"? After Roy Scheider gets a look at the killer great white shark, he says to Robert Shaw, “You’re going to need a bigger boat.”

That’s the reaction I have to the menacing demon gliding today through democracy’s waters. A fierce and insatiable obsession with power is eating away at the soul of America, destroying faith in democracy and creating economic and political inequality we haven’t seen in decades.

To survive it, we’re going to need a bigger boat.

We need a bigger moral view and a more expansive and inclusive examination of what’s gone wrong. And, make no mistake, something has gone terribly wrong.

The shark was visible in Brett Kavanaugh’s eyes and the happy reaction of many of his supporters to the hate and anger that had consumed him. Those who wanted him confirmed to the Supreme Court we’re thrilled at his melodramatic performance, a performance that embodied an adolescent’s unhinged and shallow masculinity.

It’s easy to put Donald Trump in a box marked “toxic.” He marks the box himself. It’s harder to explain people gleefully unwrapping the box to purposely breathe its fumes.

What is the appeal of a fake strong man leader for whom democracy is just another meal?

At least we can tell ourselves we’re not the only ones. It’s nothing new to humanity. We have too easily and too often sacrificed popular rule to a tough guy psychological projection we hope will vanquish our (usually imagined) enemies for us.

Since 2016, I’ve had many conversations with conservatives who are aware of these dangers. We share a concern for the integrity of the Constitution and the institutions of democracy. Recognizing the current anti-democratic moment, we’ve dropped our differences of opinion and focused on the real risks we face as a nation.

But in the furor and fervor of the time, voices calling for calm deliberation, for truth, for reconciliation, for recognition of the fragility of democracy—these voices don’t attract the audience. We know that, and it’s why we laugh at Jack Nicholson’s presidential speech to the invading aliens in "Mars Attacks."

“Why are you doing this? Why?” Nicholson asks, slapping his forehead. “We could work together…We could have it all, or we could smash it all…Why be enemies? Why can’t we all just get along?” The head alien gives him a hand. Literally. A detached hand that turns into a dagger through the heart. Oh, well.

In the confirmation of Kavanaugh, we see the will to power overwhelm all else. Yes, the death of advise and consent has been a slow one, and many share some responsibility. Still, the temper tantrums from Kavanaugh and Sen. Lindsay Graham were shocking. The cheering of them from Americans who should know better is even more shocking.

Chastising those we disagree with will only lead to more pain, however. That’s what’s meant by talking of the need for a bigger boat. I’m not sure how to do it.

It is certain that when the boat sinks, everyone will be in the water together. Do we have to wait for that? People may thrill today to the vanquishing of political opponents through subversion of democracy. But, the vanquishers are undoing their own future, too. They just don’t know it yet.

The evidence of danger is everywhere: attacks from the president and his Congressional fans on federal law enforcement, the smashing of security and trade agreements which have kept America safe and prosperous, the attacks on Americans’ right to vote, a regressive tax structure which guarantees economic and political inequality that democracy cannot survive.

Then there are Kavanaugh’s arguments that presidents are above the law? We want to take chains from our leader, but the only way to do that is to wrap ourselves in the chains. Try staying afloat then.