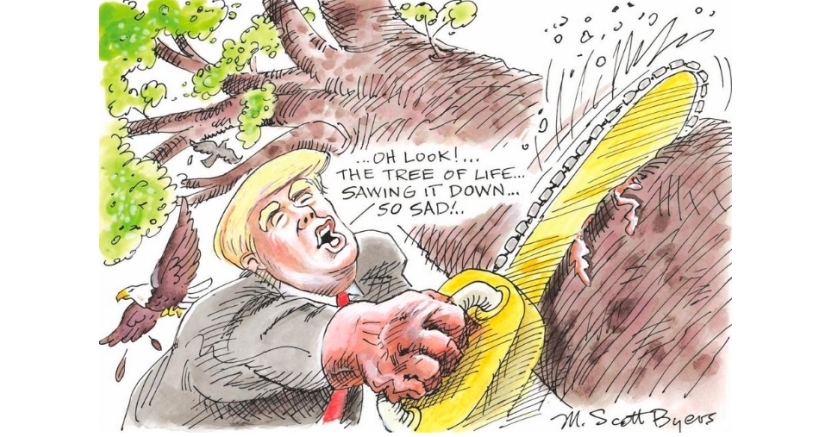 Voters have a chance to protect America's Tree of Life

Imagine sitting quietly with your family and friends in your house of worship, a place of peace. Then, a horror beyond belief strikes. Your prayers are shattered by the terrifying sounds of gunfire. Bodies fall around you. Blood spills across the floor.

This was the scene inside the Tree of Life Synagogue in Pittsburgh just over a week ago. Eleven people were killed by a gunman unquestionably deranged but also moved in part by the hateful rhetoric of President Donald Trump.

So, in light of that senseless tragedy, what is at stake in the 2018 election? No less than the Tree of Life.

You may know of the Tree of Life from your faith tradition. Often a symbol of wisdom: “She [wisdom] is a tree of life to those who take hold of her; those who hold her fast will be blessed,” it says in Proverbs.

It would seem now that a war on the Tree of Life stretches beyond Eden. Scientists say human-caused global warming is putting the actual tree of life at risk. “We are not merely trimming the terminal twigs off the tree of life, we are lopping off entire limbs,” said Stuart Pimm of Duke University.

From its anti-environmental policies, to its efforts to take health care away from millions of Americans, to its threatened abandonment of nuclear arms treaties, the Trumpist Republicans are “lopping off entire limbs” of the protections our lives, the lives of our children, and American democracy depend upon.

Currently, the GOP holds all three federal branches of government — branches, you might say, of a “Tree of Death.” In Texas, Republicans also dominate the legislative, executive and judicial branches.

At the very least, a balance of power must be restored at all levels of government.

We have to take the chainsaw from Trump’s hands and the hands of his allies at the national and state levels.

Last week, faith leaders from across America gathered in Washington, D.C., with an urgent message for us in the aftermath of the tragedy in Pittsburgh. The Rev. Dr. James Forbes, a lifelong champion of civil rights and senior minister emeritus of the historic Riverside Church in New York City, put the challenge to us directly:

“Will you vote your support for the tone, disposition and the underlying political agenda of the current administration?” he asked. “Or, are you free to dream of a world that replaces the hatred, bigotry and oppression spreading across the land? Are you willing to make the sacrifice to build a more just, compassionate and peaceful society?”

“My brother sitting in the Tree of Life, and he heard that Jordan roll,” goes the spiritual sung by 19th century American slaves. The River Jordan symbolized the Mississippi and Ohio Rivers, beyond which was the land of freedom.

That tree’s a mighty symbol of political and spiritual freedom. Today it’s covered in blood, and the question for citizens couldn’t be more urgent. Are we really willing to live with the violence, the deceit, the hatred, and oppression forced upon us by the current regimes at the Capitols in Washington and Austin?

We had better wake up.