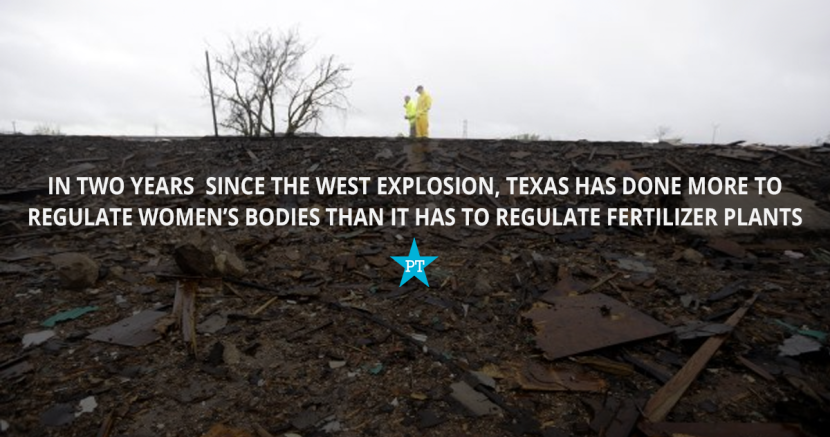 Two Years After West Explosion, No Action from #TXLege

Two years after the explosion at a West fertilizer plant killed 15 Texans and drove hundreds out of their homes, the Texas Legislature has done nothing to prevent future disasters.

And unless legislation to increase public safety starts moving quickly, any chance for reform may die by the time the Legislature leaves town in just under 50 days.

At that point, Texans will have to "just drive around" if they want to feel more safe near potentially explosive fertilizer plants.

J.B. Smith of the Waco Tribune laid it out well in a story two weeks ago:

Nearly two years after a fire set off a deadly ammonium nitrate explosion at the West Fertilizer Co., Texas businesses selling the chemical aren’t subject to any new laws, and only a handful store it in fireproof buildings as experts recommend, state officials said.

Now the window of opportunity for state-level reform of ammonium nitrate safety standards may be closing.

Three separate bills, by Democrats and Republicans, would improve public safety at Texas' fertilizer plants. But none of them seem to have a chance of moving this session.

The Waco Tribune lays out what all three bills would do.

And a third, by committee member Rep. Eddie Rodriguez, D-Austin, would require ammonium nitrate facilities to carry liability insurance, in an amount to be determined by the Texas Department of Insurance.

Unfortunately, in a Tea Party legislature obsessed with deregulation, common sense is their last priority.

Juneteenth celebrations across Texas in 2021
1 week ago

Pride celebrations across Texas in 2021