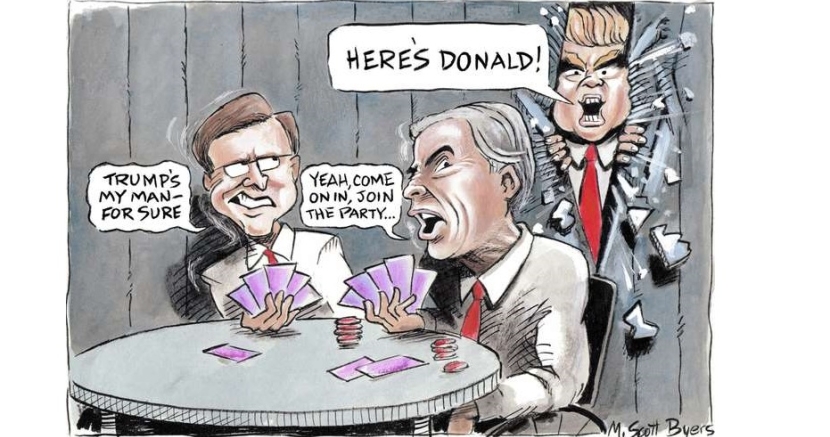 Get too close to Trump, and you're casting your fate to a dangerous wind.

The following column originally appeared in the Austin American-Statesman.

Chaos theory includes a feature called the “butterfly effect.” A butterfly waving its wings in Madagascar might one day result in a killing storm in Montana. Tiny differences can have outsized effects.

Donald Trump is no butterfly. When we ask about the likely impact in Texas of a presidential contest that pits Trump against former Sen. and Secretary of State Hillary Clinton, we need to keep that in mind.

Trump is a beast who waves his arms and creates an unpredictable chaos across the land. What those consequences will be is anyone’s guess.

Trump, of course, has gained the endorsements of key Texas Republicans, including Gov. Greg Abbott and Lt. Gov. Dan Patrick. It’s unclear why Abbott or Patrick would want to associate with a guy like Trump, who is managing to alienate many moderate Republicans.

Also, Republicans in Texas like to brag that they’ve received something like 40 percent of the Hispanic vote in past few elections. That may be true, but it is 40 percent of a population that is not voting anywhere close to its potential. Furthermore, that voting drop-off is among younger, more open-minded or progressive Hispanics.

What happens in Texas when voters learn of Trump’s racist attacks on a federal judge because the judge’s parents hailed from Mexico? What about Trump’s threat to deport 11 million people and to build a “great” wall along the Mexican border? Nationally, Trump has about a 75 percent negative rating from Hispanics.

The Trump effect, however, could extend far beyond a single demographic. There’s a reason the Abbotts and the Patricks of Texas are being rather quiet lately about their support for their party’s presumptive presidential nominee. Get too close to Trump, and you are casting your fate to a dangerous wind. You can be sure it’s going to blow, but which direction is another matter.

It’s well-known that party affiliation is the major determinant of voter decision-making. We tend to vote for the candidate of the party we identify with. Trump may test that conventional wisdom. He is straining Republican Party loyalty across the country. That uneasiness is likely underway among many Texas Republicans as well.

The same will not be true among Texas Democrats, who will vote for Hillary Clinton. That includes the many supporters of Sen. Bernie Sanders in the state.

In any case, general election consequences of heated primary elections are almost always overestimated. In 1990, Ann Richards beat Republican Clayton Williams after a primary race many believe remains one of the most brutal in history. Democrats will be united.

However, Democrats face some structural impediments to big gains this year. Republicans drew the current discriminatory district lines for seats in the Texas House of Representatives. The plan effectively disenfranchises many minority voters. Also, the nation’s most onerous voter ID law will reduce the number of progressive-leaning voters — just as the GOP planned.

It’s the long-term effects in Texas of this year’s presidential election that are most interesting. The Texas GOP is now the party of Patrick and Abbott, of indicted Attorney General Ken Paxton and of Sen. Ted Cruz. The latter isn’t even liked by his GOP colleagues in the Senate.

These four have pushed the state party further and further to the right. Each is afraid one of the others will get even more to the right of them. So they play a game of right-wing leapfrog, and now they are leaping into the unknown with Trump.

So, will the smart money bet against their futures? As honest gamblers will tell you, the house never loses — unless the house is owned by Trump, whose failed casinos might give a symbolic glimpse of the future of a GOP he now leads.