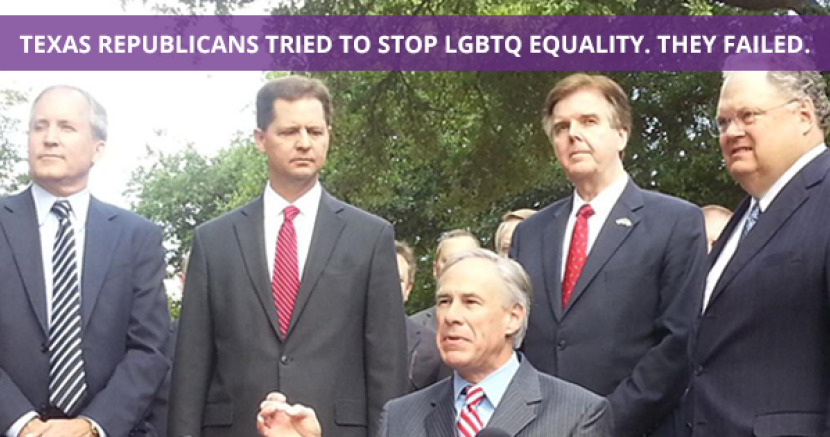 After introducing more than 20 anti-LGBTQ bills this legislative session—ranging from bills that targeted marriage equality to so-called “religious freedom” and local preemption proposals that aimed to legalize discrimination against LGBT Texans—Texas Republicans managed to pass only two measures, both equally inconsequential. With the prospect of marriage equality in Texas just around the corner, Senate Bill 2065 and Senate Resolution 1028 are significant only in so far as they reflect the total impotence of the GOP’s anti-LGBTQ agenda.

SB 2065, signed into law by Gov. Greg Abbott and trumpeted by the right as the so-called “Pastor Protection Act,” merely reaffirms an already constitutionally protected right of clergy (see: First Amendment of the US Constitution) not to perform gay and lesbian weddings.

Though as originally introduced this “religious freedom” bill contained broad language that would have legalized discrimination against LGBTQ Texans on a number of fronts, LGBTQ advocates and civil rights groups withdrew their opposition to the bill after it was narrowed considerably. Senate Bill 2065 passed the Texas House with nearly unanimous bipartisan support, including from two openly gay Texas lawmakers.

After a bill blocked by House Democrats—HB 4105, the most flagrant attempt to undermine the Supreme Court’s expect marriage ruling—failed to sneak through the Senate as an amendment to an otherwise innocuous bill, Senate Republicans passed another measure with no impact. Under the desperate leadership of Lt. Gov. Dan Patrick, this non-binding, toothless, anti-gay marriage Senate Resolution 1028 passed the Texas Senate 21-10.

The fight for equality continues

Though Democratic lawmakers and LGBT advocates defeated a record-breaking amount of anti-LGBTQ bills and amendments this session, our work is not over. In much of Texas today, it is still legal to fire or turn away gay and transgender Texans simply because of who they are.