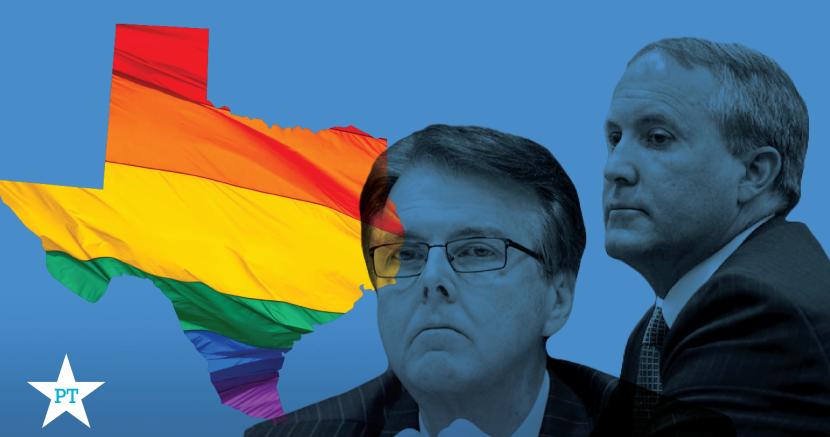 Texas Republicans are jeopardizing the lives, health, and safety of transgender people in a brutish attempt to score political points.

With two back to back attacks on the rights of transgender people in Texas, this week is endemic of Texas Republicans cruel crusade of discrimination — standing as an unfortunate reminder that the fight for LGBTQ equality is far from over in our state. Just days after a conservative federal judge in Texas dealt a procedural setback to federal protections for transgender students in school, indicted Texas Attorney General Ken Paxton initiated another lawsuit aimed at denying transgender people health care.

Working alongside other Republican politicians — like Governor Greg Abbott and Lieutenant Governor Dan Patrick — Paxton is jeopardizing the lives, health, and safety of transgender people — an already marginalized, at-risk community — in a brutish attempt to score cheap political points.

According to national data, 75% of transgender youth feel unsafe at school. To address this reality, hundreds of schools and school districts across the country and state have worked to craft common sense policies to ensure that schools are safe spaces for transgender students.  Days after the Obama administration issued guidance that would help extend these nondiscrimination policies to schools nationwide, Ken Paxton filed suit — setting out to make transgender youth — who already face harassment and bullying to an unimaginable degree  — the targets in his campaign of state-sanctioned discrimination.

Despite the misinformation contained in Ken Paxton’s “guidance letter” on the impact of the injunction, this temporary block of the Obama administration’s nondiscrimination guidance doesn't change the legal rights of students, schools, and school districts.

Rebecca Robertson, legal and policy director of the ACLU of Texas explained to the Houston Chronicle: