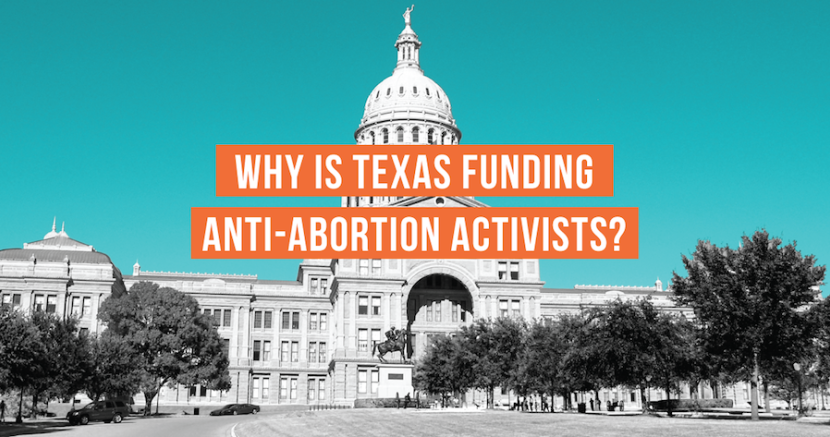 A year ago, news broke that an anti-abortion group with ties to the state — and no record of providing health care — received a $1.6 million grant to participate in the Texas women’s health program. Since then, it was revealed the Heidi Group also received a $5.1 million grant to participate in the state’s family planning program. Progress Texas asked the state to investigate the women’s health contract fraud at the time, and this week a criminal complaint against the Heidi Group was filed by a national government accountability organization — the Campaign for Accountability.

And Republicans who control the state legislature didn’t stopped there. At the same time, they also poured millions of dollars into sham anti-abortion clinics — aka “crisis pregnancy centers” — from a separate state-funded, anti-abortion program. Instead of directing much-needed funding to provide actual health care to Texas women and families — fewer and fewer of whom are getting the care they need — this last legislative session, anti-abortion politicians doubled funding for their unlicensed, unregulated CPC “Alternatives to Abortion” program to the tune of $20 million.

To the surprise of absolutely no one besides the state’s ruling party, Heidi Group and it’s founder Carol Everett — a woman with a shockingly warped understanding of basic science and reproductive health — failed to provide the health care services they were paid millions to provide. Just last month, the state health agency slashed Heidi Group’s family planning contract by $4 million. Meaning Texas squandered more than $2.5 million in tax dollars on the fraudulent program peddled by Heidi Group and Everett.

Where did the money go?

A criminal complaint filed by the Campaign for Accountability (CfA) alleges the Heidi Group and Carol Everett violated criminal law by taking funds for services the group never provided or intended to provide, misappropriating state funds, and engaging in deceptive business practices.

As outlined by the criminal complaint filed with the Travis County District Attorney’s office, the Heidi Group continued to cash in on its state contracts while failing to deliver on the terms of its contracts — getting low-income women matched with doctors to provide family planning and women’s health services. The CfA’s investigation found Heidi Group even subcontracted with many “clinics” that are ineligible to receive state funding through these programs.

In addition to the criminal complaint, CfA filed a complaint with the IRS alleging the Heidi Group violated its tax-exempt status by, among other things, misspending funds on a cruise and Lincoln Town Car.

Why is the state funding all these other shady anti-abortion groups?

Prior to rebranding itself and receiving — and misappropriating — state funding to operate as a health care provider, the Heidi Group and Everett received funding under the state’s “Alternative to Abortion” program to operate a network of CPCs. Funding for these fake medical clinics whose sole purpose is to dissuade women from accessing abortion — and who rely on deceptive and dangerous tactics to do so — has soared in recent years, allowing these insidious clinics to proliferate across the state. An investigation conducted by the Texas Observer found Texas CPCs deliver fewer services to women, while spending more per client than family planning providers. This year, instead of meaningfully addressing the state's maternal mortality crisis, Gov. Abbott signed a state budget that doubled funding for CPCs — now at $20 million — and zeroed out all state funding for Planned Parenthood.