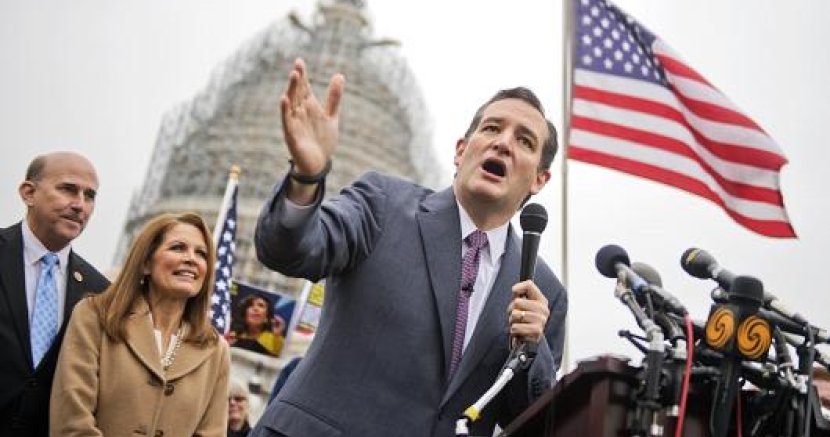 Texas Senator Ted Cruz who recently announced that he would be running for President in 2016 has already raised $31 million through four super PACs, and that’s terrifying.

Since the 2010 ruling on Citizens United that gave individuals unlimited spending power in presidential races, we’ve seen political candidates rake in cash from big industry donors like the Koch brothers at alarming rates. But never have we seen anything like what Cruz has raised in the last week.

“Even in the context of a presidential campaign cycle in which the major party nominees are expected to raise more than $1.5 billion, Cruz’s haul is eye-popping, one that instantly raises the stakes in the Republican fundraising contest...Although super-PACs have radically changed the pace at which committees backing presidential candidates can raise money, the Cruz haul is remarkable. There are no known cases in which an operation backing a White House hopeful has collected this much money in less than a week.”

The four PACs— all named some variation of “keep the promise”— are each aimed at whichever element of Cruz’s campaign the PAC donors want to be involved in. According to the PAC documents which quote a high-level donor from Austin:

“We’re just getting started … Our goal is to guarantee Senator Cruz can compete against any candidate. Supporters of the Senator now have a powerful vehicle with the resources necessary to aid in his effort to secure the Republican nomination and win back the White House.”

What’s scary about that statement is the admission that financial resources are in fact a “powerful vehicle” in the race for the White House, and those resources make some citizens much more valuable than the whole.

It may not be much, but there’s something the Texas Legislature can do to speak up about it. There’s a resolution— HCR 49— that would ask Congress to reverse Citizens United, and regulate a fair election process.

We hope Texas’ elected officials support the resolution, and take a strong stance against the unfair influence of corporate money in our elections.