The Supreme Court Ruled One Way - Here's How You Fight Back 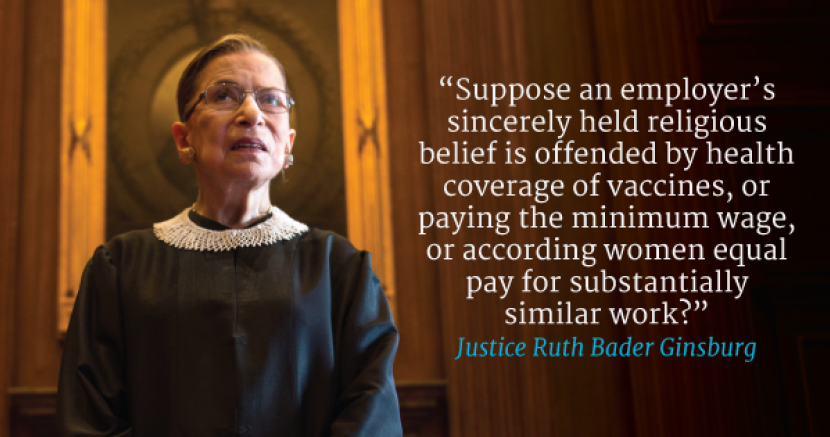 Today the U.S. Supreme Court gave CEOs the right to deny women insurance coverage for birth control based on their personal religious beliefs.

The ruling, along with other SCOTUS cases, underscore why courts matter. These rulings are a reminder that who you vote for - and who they put on the courts - matters.

Here's a summary of today's decisions.

In an unprecedented decision, five male Justices on the Supreme Court ruled that: (1) 90% of for-profit corporations have legally protected religious beliefs, and (2) if it conflicts with a corporations’ religious beliefs, the government cannot require that they provide insurance coverage for women’s birth control and emergency contraception.

In effect, these Justices gave employers the right to decide - based on their personal religious beliefs - whether women employees and their families have access to affordable birth control.

“Today's ruling is deeply disappointing and damaging to reproductive freedom, and a dangerous intrusion into the religious liberties of all Americans. By ruling in favor of Hobby Lobby, the Supreme Court has ruled that a corporation's religious beliefs are more important than the religious beliefs and health care of the women who work there."

In a well-reasoned and scathing dissent, Justice Ruth Bader Ginsburg expounds on the “untoward effects” this ruling is “bound to have,” reasoning:

“And where is the stopping point to the "let the government pay" alternative? Suppose an employer’s sincerely held religious belief is offended by health coverage of vaccines, or paying the minimum wage, or according women equal pay for substantially similar work?”

You can read the full opinion of the case here.

The Supreme Court has ruled that corporations have free speech and religious beliefs. Unions - made up of actual people - may not be so lucky.

Alito’s opinion in Harris v. Quinn recognizes a category of “partial public employees” who cannot be required to contribute funds to the collective bargaining that they benefit from. This case involved Medicaid home health workers who are paid by the state but who work directly for individual patients. Nevertheless, the case hints that the Court will deal additional blows to public sector unions in the future. Alito labels a seminal Supreme Court opinion allowing unions to collect reimbursements from nonmembers “questionable on several grounds.”

You can read the full opinion of the case here.

SCOTUS only decides 1% of all cases in America's court system - and even the cases it rules on rely heavily on lower court rulings. The judges that sit on the lower courts - federal district and circuit courts - are nominated by home-state senators.

So who you support for Senator, and who they nominate to fill vacancies, matters. You can also take action by contacting Sens. Cornyn and Cruz right now and telling them you want them to fill Texas's 11 vacancies on our federal courts by nominating diverse, qualified judges immediately.