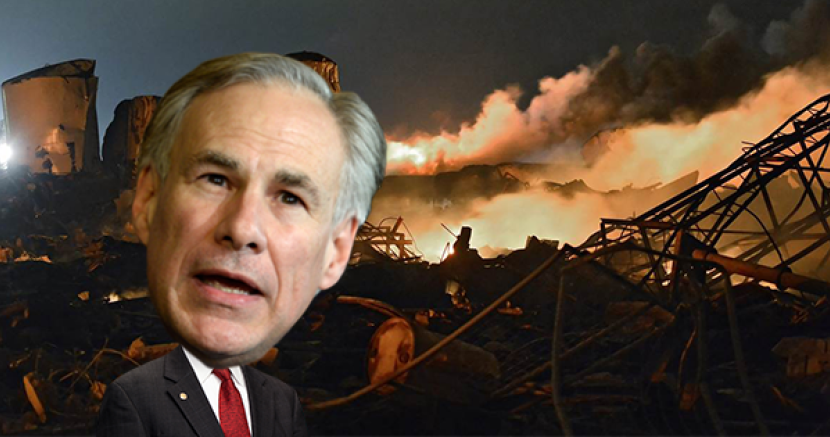 The overwhelming backlash against Greg Abbott and his irresponsible policies proves once again just how out-of-touch and in it for the insiders he really is.

Last week, Greg Abbott doubled down on his decision to block Texan’s access to information on the location and contents of hazardous chemical plants, telling reporters that Texas families could just “drive around the neighborhood” and “ask every facility whether or not they have chemicals.”

Not surprisingly, vehement criticism of Abbott's dangerous chemical legal rulings and "chemical road trip" proposal has poured in from across the state.

But don't just take our word for it, check out the top ten stories we pulled together from major Texas news outlets:

"[W]e have trouble understanding the reasoning behind state Attorney General Greg Abbott's abrupt decision to refuse to give the public key information about where plants stockpiling ammonium nitrate are located...The attorney general’s decision is definitely at odds with growing efforts to prevent another West."

"In defending his office’s ruling — one he said he was unaware of until the uproar — the attorney general made several statements that were insulting and certainly not befitting a candidate for governor."

--"Texas AG off-base in decision not to release locations of where chemicals are stored,” July 7, 2014

"Wendy Davis clearly won her exchange with Greg Abbott over whether the public had the right to know where dangerous chemicals may be stored...He should acknowledge that families have the right to know if and where chemicals are stored. This ought to be a no-brainer."

"Boy, did Attorney General Greg Abbott step in it...'Drive around,' was the AG’s advice. 'You can ask every facility whether or not they have chemicals or not.'...That's a sorry come-about, as this state tries to learn from last year’s deadly fertilizer disaster in West and keep data available to Texans who deserve to know about danger around the corner."

--"Editorial: Want to find out what chemical plants are storing inside? You must ask," July 5, 2014

"Texans have a right to know what dangers to our health and safety we are being exposed to..."

"Abbott says the public can still go knock on chemical company doors and ask...So, WFAA attempted to do just that...First up was Oxy Chemical...WFAA left empty handed. Next stop was Buckley Oil Company just down the road...Despite the attorney general's declaration, the business was clearly not interested in allowing the public knowledge of what's being stored on site."

--"Abbott tells citizens to get chemical lists from businesses, not the state," July 2, 2014

"Attorney General Greg Abbott should reverse his decision on storage of chemicals."

--"Editorial: Abbott should reverse his decision on storage of chemicals," July 5, 2014

"Abbott conceded Wednesday that getting information about dangerous chemicals in Texas is 'challenging.'"

"Not everyone agrees with Abbott's reading of the law...Requests by the Houston Chronicle to 20 companies and local emergency response agencies last month produced mixed results..."

--"Abbott says companies must release chemical info but state does not," July 2, 2014