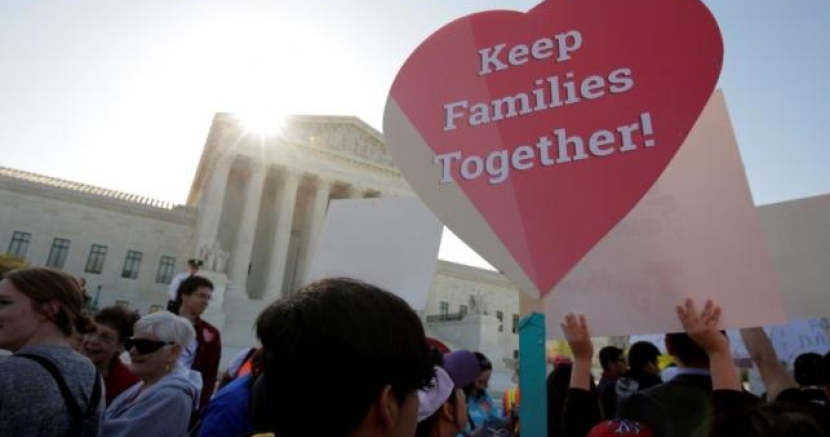 This wasn’t about Constitutional principle. It was about a growing storm of bigotry and xenophobia washing over America and Europe.

Taken together, this week’s U.S. Supreme Court decisions in two cases originating in Texas seem to say, “No worries that the University of Texas admissions policy can consider race because we’re going to deport one million Texas Hispanics anyway.”

We refer of course to the court’s deadlocked vote letting stand a lower court’s rejection of President Obama’s memorandum to immigration authorities. The President’s memo asked that they defer action on the possible deportation of four million undocumented immigrant children and their parents. Texas and other Republican-controlled state governments called this “executive overreach.”

The other case is the zombie litigation involving UT admissions policy that includes some consideration of the race of applicants. It only seems like generations have graduated from the UT School of Law since rejected applicant Abigail Fisher first brought the suit. The Court upheld the affirmative action policy.

The Court’s decision to uphold UT’s admissions policy that includes consideration of applicants’ race is a major victory for equal opportunity in America. As President Obama said in reaction to the ruling,“We are not a country that guarantees equal outcomes, but we do strive to provide an equal shot to everybody.”

However, it’s tragic that at the same time, the Court – missing its ninth member since Republicans refuse to confirm President Obama’s choice – deadlocked 4-4 on the immigration case.

The case was really never about executive actions. Presidential power deserves scrutiny and should always be subject to Constitutional limits. But this wasn’t about Constitutional principle. The challenge to executive authority was just an excuse. It was about a growing storm of bigotry and xenophobia washing over America and Europe.

The history of the case is strange, and the conclusion today has a Kafkaesque feel to it. The state of Texas and other states “forum shopped” their lawsuit, landing in the federal court of Judge Andrew S.Hanen of Brownsville. In the past, Republicans condemned forum shopping, complaining that it gave plaintiffs an unfair advantage. I guess that only matters if they are the defendants.

Anyway, Hanen, a loud and frequent critic of immigration policy, once accused the Department of Homeland Security of “completing the criminal mission” of immigration law violators with their lax enforcement.

Predictably, Hanen did what he could. He ruled Texas had standing to sue, and he ruled that Texas and other states would probably win a future trial in his court. Probably win. The U.S. 5th Circuit Court of Appeals affirmed the states’ standing and the “probably win” part, noting that the immigration policy was vulnerable to other legal challenges.

So, four million human beings are now subject to deportation from America because 1) A couple of courts have ruled that a case against a policy that protects them would probably prevail if heard on the merits; and, 2) Because the GOP refuses to do its job and confirm a ninth justice to the Supreme Court, the Court deadlocked and those “probably prevail” rulings stand.

The University of Texas can still take steps to help make something like equal opportunity possible, at least within the UT system. Of course, a great number of Hispanic children may never be able to take advantage of that opportunity now because of the bigots’ victory on immigration policy.

While I was writing the above the song “Three Storms Until You Learn to Float” by the band Cloud Cult was streaming through the browser.

Suddenly, unbidden, a New York Times video of United We Dream activists outside the Court today began to play. I didn’t know the song, and at first thought the Dreamers’ voices were part of it. They were speaking with power to power.

Cloud Cult’s song is an instrumental, but the title is suggestive. We can hope with the Dreamers that they survive this storm. They have already faced many more than three.