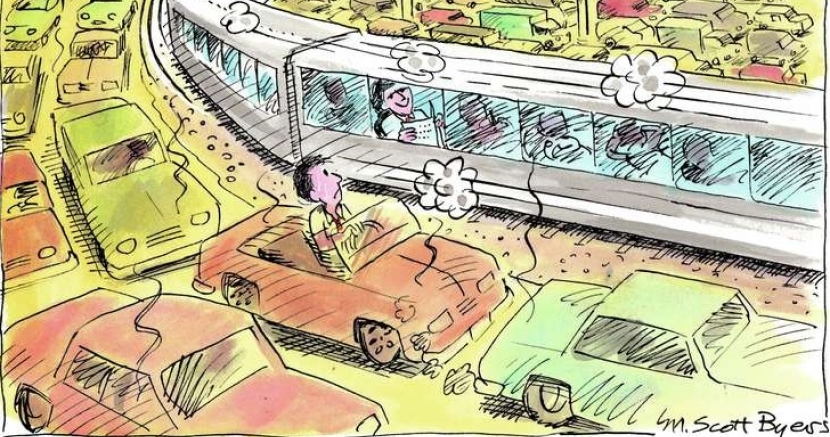 Dream big, they say, but take account of decades of dashed dreams when it comes to cures for traffic.

Ed. note: the political cartoon above and the following column is reposted with permission from the Austin American-Statesman.

“Local trains are hard to come by,” wails bluesman Buddy Guy in his song “Ain’t No Midnight Train.” It’s a song about a train that never comes. Here and across Texas, they seldom do, no matter the time of day or night.

The next time you’re sitting at a dead stop in Interstate 35 traffic, alone in your car with nothing on the radio but hate-talk, glance over toward the train tracks to the east. Imagine you’re snuggled down peacefully into a plush recliner as your train gets you where you’re going faster than you can read a few pages in one of those new books on happiness.

Then again, maybe you’d better not indulge that fantasy. Dream big, they say, but take account of decades of dashed dreams when it comes to cures for traffic.

Case in point: The latest commuter line to be derailed is the Lone Star Rail, an inter-city line planned to run 117 miles along the I-35 corridor through Round Rock, Austin and on to San Antonio. The coffin-nail hammer was in the hands of Hays County Commissioner Will Conley, a Republican who is also chairman of the Capital Area Metropolitan Planning Organization. At Conley’s urging, CAMPO voted earlier this month to remove Lone Star from its 25-year plan.

In 2014, local, state and even national conservatives campaigned hard against a proposed light rail service in Austin. Voters subsequently rejected a bond proposal to fund the rail.

A proposed high-speed rail connecting Houston and Dallas is also under assault from right-wing activists opposed to rail. Recently, a protestor was caught on tape shouting “Remember Pearl Harbor” during a recent rally against the Japanese company trying to build the train.

Yes, Austin has MetroRail, a light rail that runs from Leander to downtown. Republicans don’t like it, either. A recent Forbes magazine article by a longtime right-wing opponent of rail calls it “perhaps America’s leading rail transit failure.” That was predictable.

Opponents of the Lone Star Rail are full of reasons and excuses. “Why we can’t” often beats “why we can,” so Conley and his allies found it reasonably easy to wreck Lone Star Rail.

Austin, like other urban areas in Texas, is in a tough spot. Surrounding suburban counties, major contributors to traffic woes, often disagree about solutions. They are also full of anti-rail tea party types who oppose most solutions that don’t involve more concrete and more cars. As Texas’ urban areas become more Democratic, Republican leaders’ concern about them declines. It’s a vicious traffic circle, so to speak.

It’s enough to make one pine for the days of Lyndon Johnson, former Congressman James P. Buchanan, George and Herman Brown and others, those Texas titans who bent a rule or two but tamed the Colorado River and helped create the Highland Lakes. We have the same rule bending today, no doubt, but none of the infrastructure accomplishments.

Study after study shows that we can’t road-build our way out of our traffic woes. Construction was started on I-45 from Houston to Galveston in 1948. It is still under construction. The problem is due to what traffic engineers call “induced demand.” As soon as you build or expand a road, traffic expands to fill it to capacity. Woe unto the MoPac toll lanes.

Do outfits like the Texas Public Policy Foundation and the Cato Institute oppose rail because it might work? They claim it’s because rail is expensive and inefficient. But those are hollow claims when compared to the real and growing costs of traffic congestion.

Loss of the Lone Star Rail is an immediate setback. But the consequences will extend beyond the I-35 corridor as right-wing ideological opposition to commuter rail scores another win. It’s the Texas GOP’s even scarier bête noire, the “welfare Cadillac” of the 21st century.