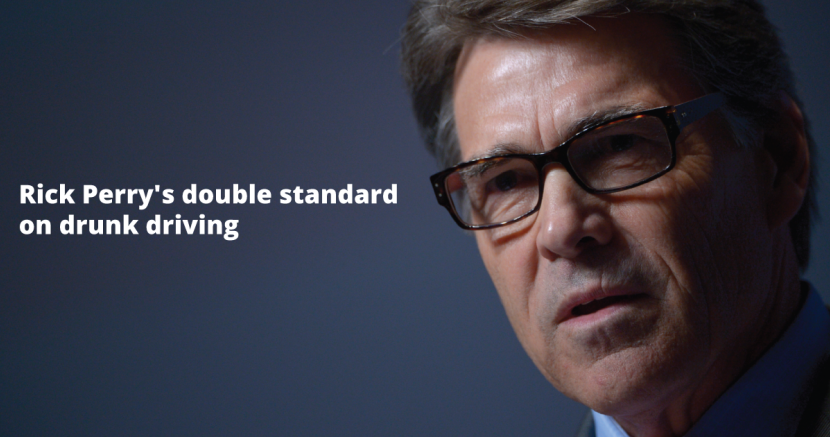 Gov. Rick Perry's administration promoted a convicted drunk driver to chair the same Cancer Research Fund that was being investigated by Travis County District Attorney Rosemary Lehmberg. When she was convicted for the same offense, Perry said she had lost the public trust and needed to resign, adding recently that "given the chance, he'd do it again." But his recent appointment to head up the Cancer Research fund proves otherwise, indicating that he's less against "Driving While Intoxicated" and more against "Driving While Democrat."

Wayne Roberts, who now heads up the governor’s signature creation, the Cancer Prevention and Research Institute of Texas, was convicted of driving while intoxicated in 1990 and 2006. He also was fined in 2000 on a charge of public intoxication in Virginia.

Perry made him budget director in December 2001 and appointed him to the State Pension Review Board in 2009. The board of the cancer fund, known as CPRIT, appointed Roberts to his current position, and three of the board members were selected by Perry. At both the pension board and CPRIT, Roberts oversees billions of state dollars.

Like Lehmberg, Roberts seems to have paid the price for his infractions. But unlike Lehmberg, Roberts was charged with drunk driving and public intoxication three times! And rather than calling for a resignation, Perry's administration has done the opposite and promoted him. That's an inconvenient double standard that comes at a time when Perry is in court defending a charge of coercing Lehmberg to resign over her single drunk driving offense.

In our previous coverage of Gov. Perry's awkward history with drunk drivers, we cited these other examples of Gov. Perry promoting similarly positioned public officials or ignoring their offenses entirely: