Republican Overreach: A Preview Of The 84th Legislature 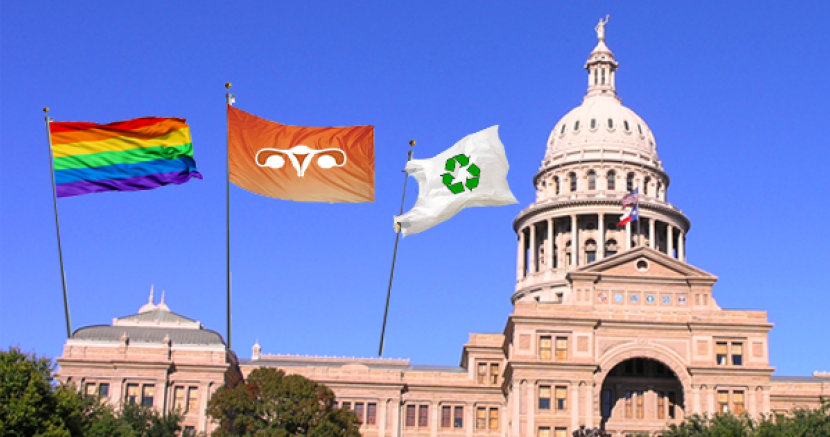 The 84th legislative session is set to begin on January 13, and Texas Republicans are already offering a preview of their priorities. No, it’s not jobs and the economy, but an all-too-familiar political overreach from the supposed party of “limited government.”

There they go again: It wouldn’t be a legislative session without Republicans trying to strip women of their right to safe abortion care. The newest proposal in a series of bills that restrict reproductive services has been popping up in states across the nation— Republicans want to make it illegal to seek sex-selective abortions. Republicans are showcasing the male to female birth ratio as a claim that female fetuses are being aborted based on gender. Here’s the problem, the gender ratio in the U.S. is fairly normal, and there is no data that supports the theory that women are seeking sex-selective abortions on a broad scale, or any scale at all for that matter.

The primary motivation behind these laws is simply the same as all of the other laws we’ve seen: to limit access to abortion services.

Despite research showing that nearly 70% of Texans support the freedom to marry, Republican legislators have made it their mission to discriminate against loving families. So, it’s not surprising that not just one— but TWO!—  proposals have been filed that would, if passed, legislate against Texans rights.

Sen. Donna Campbell and Rep. Jason Villalba have filed joint resolutions that would create a license to discriminate based on religious beliefs. The resolutions are designed to block the enforcement of municipal non-discrimination ordinances which protect LGBTQ Texans at the local level. They say a Texas law is necessary, even though there are already federal and state laws that protect religious freedom. At the state level, Texas has the Religious Freedom Restoration Act, or RFRA. Ironically, this need for a state law is a direct contradiction to Texas Republicans’ argument against a state law enforcing pay equity. I digress…

What’s more scary is how broad the spectrum of discrimination is— in practice, the law could allow for ANY type of discrimination— based on religion, sexual orientation, ethnicity, etc— to take place. Discrimination laws impact everyone, regardless of who is targeted by the legislation. It affects business, families, and negatively shapes public discourse.

Not only are Republicans fighting against same-sex marriage, but they’re fighting against those who support it as well. Rep. Cecil Bell filed a bill this week that the Texas Observer reports:

“...would amend the Texas Family Code to prohibit the use of  taxpayer funds for the the licensing or support of same-sex marriage. It would also bar government employees from recognizing, granting or enforcing same-sex marriage licenses. Any government employee who violates the provision would be barred from collecting a salary, pension, or other employee benefit. (It) would also require Texas courts to dismiss challenges to the law and award attorneys’ fees to defendants. And it would grant Texas sovereign immunity under the 11th Amendment to the U.S. Constitution when it comes to enforcing the law, regardless of a contrary federal court ruling.”

If there’s one thing Texas Republicans, namely Governor-Elect Greg Abbott, do a lot of it’s talking about limited government. But Greg Abbott showed us this week that when he says “limited government” we need to read the fine print. Because for Abbott, limited government looks more like only limiting government that he disagrees with. In a conference hosted by the conservative Texas Public Policy Foundation, Abbott stated local municipalities are eroding Texas:

“It’s being done at the city level with bag bans, fracking bans, tree-cutting bans. We’re forming a patchwork quilt of bans and rules and regulations that is eroding the Texas model.”

Yeah, that sounds a lot like government overreach to us, too. Squashing local control is an abuse of power. If republicans really believe in limited government, they need to start practicing what they preach.