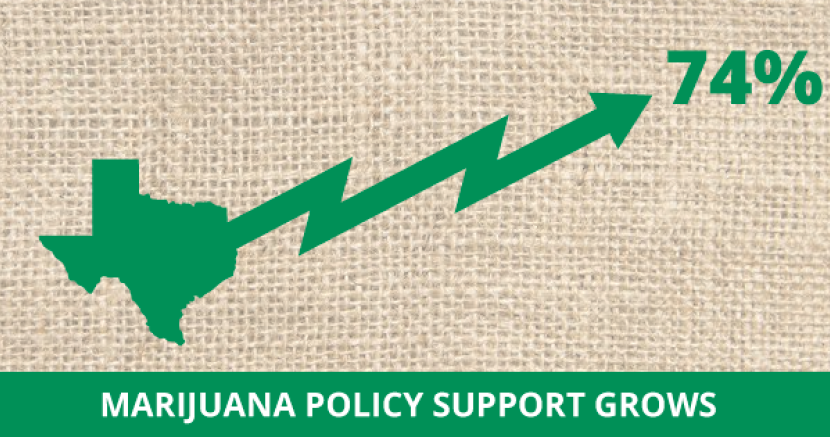 The momentum continues to grow for marijuana policy reform.

After a year of unprecedented progress for marijuana policy reform and good polls from earlier this year, a new poll from the Texas Lyceum finds that a record 74% of Texans support reducing criminal penalties for small possession of marijuana.

The poll shows that Texas is ready for marijuana policy reform - it can improve public safety, boost our economy, and provide much-needed health care options for struggling Texans.

Two years ago, in 2013, a PPP poll found that 61% of Texans favored reducing penalties for small possession of marijuana. Then a poll from the University of Texas at Austin and Texas Tribune found that as many as 68% of Texans supported the policy.

Now, a poll from the Texas Lyceum finds that number has jumped to 74% - as can be seen by adding the blue "support" and green "oppose legalization, support decriminalization" portions of the chart below:
[[{"fid":"2000","view_mode":"default","fields":{"format":"default","field_file_image_alt_text[und][0][value]":"","field_file_image_title_text[und][0][value]":""},"type":"media","attributes":{"height":"857","width":"1424","style":"width: 500px; height: 301px;","class":"media-element file-default"}}]]
During the recent session, Rep. Joe Moody (D-El Paso) offered legislation that would have made possession of less than one ounce of marijuana a ticketable offense, like running a red light. The El Paso Times wrote a feature about Rep. Moody, where he talked about what's next:

“I think we need to make it a major issue early on,” Moody said of the coming legislative session.

He’s working to do that already. A few weeks ago, he spoke about decriminalization to a gathering of political consultants in Austin.

“They were very interested,” Moody said. “We got a lot of questions. There wasn’t an empty seat in the room.”

As many experts and supporters testified during the legislative session, Rep. Moody's bill makes a lot of sense. Instead of jailing as many as 70,000 Texans - at a cost of over $700 million to the state every year - police can issue a ticket of up to $250 for anyone caught with one ounce or less of marijuana.

We will continue sharing updates on this issue as we continue our advocacy for marijuana policy reform in Texas.