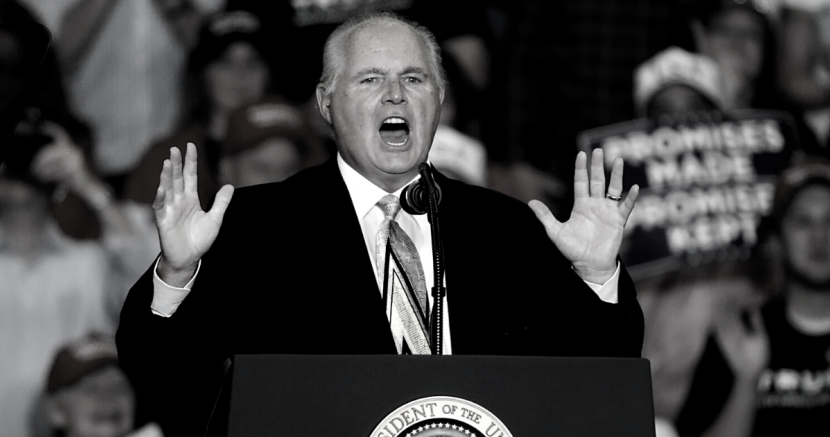 Chris Mosser
His legacy is our politically polarized media landscape.

Conservative talk radio founding father Rush Limbaugh has died at 70, making now an opportune moment to consider the impact of the man and his medium upon our nation and our lives.

While Limbaugh came to personify and epitomize the conservative talk format, he didn't technically invent it, but he did serve as its birth catalyst. From the immediate post-WWII period to the mid-1980's, news-based radio and television in the U.S. were subject to the Fairness Doctrine, which was a policy held by the Federal Communications Commission that required programming dedicated to the discussion of matters of public importance, and within that discussion the equal presentation of disparate political viewpoints. During that period, progressive-leaning voices were as common as their conservative cousins — but the Fairness Doctrine was abolished in 1987 in the interest of protecting journalistic freedom.

Rush Hudson Limbaugh III bounced between radio and sports media gigs in Kansas City and Pennsylvania, finding his initial breakthrough as a conservative commentator in Sacramento, California and springboarding in 1988 with the repeal of the Fairness Doctrine to a much larger audience at WABC-AM in New York, which would remain his flagship station through 2013. The ABC Radio Network was soon providing Limbaugh's daily show to well over 600 local communities throughout the country, and establishing him as the conservative talk radio format's best-known personality by the early 1990s.

Another major deregulation for radio would follow, and even further solidify Limbaugh's dominant position: the Telecommunications Act of 1996 lifted limits on the number of stations that any individual company could own and control, leading to a feeding frenzy. Privately-owned "Mom and Pop" stations and smaller operators were quickly gobbled up by larger and rapidly-growing conglomerates, including Clear Channel Communications, which had started relatively small with stations scattered across Texas and Oklahoma, but quickly ballooned into the largest holder of broadcast licenses in the country - many of which were for talk-based stations. Clear Channel soon signed Limbaugh to its most lucrative and wide-ranging syndication agreement, broadening his already extensive footprint exponentially.

A key factor to Limbaugh's popularity was the likelihood that he'd say something shocking. He had a fair amount in common with another rising national radio voice of the time, Howard Stern. Both tended towards misogyny to land a line, but while Stern sought to titillate, Limbaugh sought to undermine feminism itself in the minds of male listeners in a much more personal and fundamental way. And it certainly didn't stop there: Limbaugh would court controversy with incendiary commentary on LGTBQ Americans, people of color, and other non-WASP groups, all presented as entertainment rather than news or facts.

This is perhaps his most egregious impact — Rush Limbaugh trained white American men to believe that the bigotry and chauvinism they harbored in their hearts was not only common, but that it was correct. Limbaugh's enormous group of loyal listeners, who came to call themselves "Dittoheads,” flocked to his programs in order to deepen and justify their backwards biases daily for years. This established a sizable audience that was very much unaccustomed to having its intolerance challenged, and provided a specific market niche that would later be serviced by the likes of Fox News, Breitbart and umpteen others of dubious repute, including the products of Alex Jones, over whom Limbaugh has headlined on the marquee of many a talk radio station.

Rush Limbaugh marks the moment where a populist mob mentality began to wrest the steering wheel of the Republican Party from the fingers of its elected leaders, leaving them only to navigate their own careers at the behest and exploitations of the mob's reactive whims - not in any real hope of constructive influence, but frequently in pursuit of the personal advantages that the crafty might wring from such a blundering, wounded rabble.

The legacy of Rush Limbaugh is our current and possibly permanent fragmented and politically polarized media landscape, which undeniably underlies and begets the destructive division that threatens our very Republic today.

Rush Limbaugh wrote the book on how to draw in the unenlightened and the angry with reassurances that their innermost and generally hidden thoughts are actually valid, and further that there is an entire national community that shares these views. That inconvenient facts are easily brushed aside in the name of this shared philosophy. That unity trumps reality, that ignorant, narrow-minded prejudice can easily be smoothed into "common sense,” and that in great numbers there is great power - enough, in fact, to eventually seize the presidency, and secure for Limbaugh the Presidential Medal of Freedom last year. There is a direct causal line from Rush Limbaugh to the Trump disaster.

Limbaugh died a very, very wealthy man - those proceeds derived from having played a central role in the very rending of the American fabric.

Chris Mosser is a native Texan and a 25-year Austin media veteran.