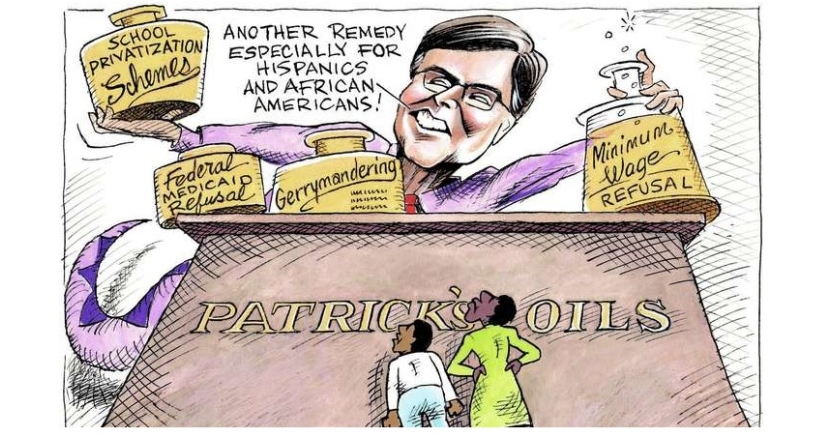 Is it just a coincidence that private school funding schemes are gaining steam as a far more diverse bunch of kids are sitting in our public classrooms?
Ed. note: the following column and the above political cartoon originally appeared in the Austin American-Statesman. Illustration by M. Scott Byers.
What is it about public education that some Texas Republican officeholders dislike so much? What has changed in the world to cause Lt. Gov. Dan Patrick’s zealous promotion of the use of public tax dollars to educate wealthy kids in private schools?

Patrick has even used terms like “the end of public education as we know it” when discussing the prospects for school privatization in 2017. He’s vowed to make it the year the Texas Legislature tightens the noose around public education and funnels our tax dollars to private school profiteers.

Is it just a coincidence that private school funding schemes are gaining steam as a far more diverse bunch of kids are sitting in our public classrooms? Less than 29 percent of our public school children are white, down more than a third from the year 2000. Hispanics now make up 52 percent of the Texas school population. African-Americans are 13 percent and Asians 4 percent of students.

Republicans were caught in a similar circumstance in their efforts to disenfranchise voters of color through the gerrymandering of political district lines. They argued that their intent wasn’t racist. It was political. They just drew lines favoring their party. It was just an accident that representation was reduced for a number of people who happened to be Hispanic or African-American.

This ridiculous dodge is important to keep in mind. When we assess the 2017 prospects for voucher schemes and other privatization efforts, the credibility of proponents should be foremost on our minds. Their trustworthiness, and not the mind-numbing blizzard of questionable statistics, should be our guide.

Patrick and others frequently claim that school privatization is all about helping poorer students escape failing or dangerous public schools. Vouchers, tax credit scholarships, private education funds and the like will help poor kids struggling through substandard public schools.

But we can’t forget that the people making that argument are the people who have overseen those public schools for decades. If the schools are failing, it is because the private school backers made them fail.

These same policymakers refused to accept billions in federal Medicaid reform dollars, leaving millions of the less fortunate without adequate health care. Now we discover that the maternal death rate in Texas has skyrocketed, especially among poor African-American women. In addition, as the Houston Chronicle reported last week, the state abandoned hundreds of thousands of special needs children by arbitrary cuts to special education.

Also, we shouldn’t forget the refusal of Patrick, Gov. Greg Abbott and other Republican leaders to entertain statewide increases in the minimum wage. Low-wage workers should be happy to eat the stale cake their superiors deign to give them.

The policymakers responsible for these atrocities are the same ones telling us their school privatization plans are intended to help the very people they are punishing in every other major policy area — from health care to political representation to economic opportunity.

In 2017 Patrick might push some of his schemes through the state Senate that he controls. But this is one issue in which rural lawmakers, many of them conservative Republicans, are allied with moderate or liberal urban representatives.

Public schools remain critical centers of life in many rural communities. Folks there lived through the “Wal-Marting” of their towns as the giant retailer drove the mom and pop stores out of business. They aren’t about to let that happen to their schools. They aren’t going to sit by as the Little Red Schoolhouse is turned into the Great Big Red State Profit Center.

Patrick’s plans appear to call for the creation of two K-12 school systems, one public, and one private. This is also giving many conservatives pause. Texas can’t afford that. Various estimates put the tab in the billions.

If Patrick should succeed, we’d better keep our fingers crossed that future generations get schooling enough to learn that there are real snakes lurking behind the snake oil. However, if the prospects for school privatization are measured by the credibility of its salespeople, their efforts are doomed.

For Graduates of 2020: Youth in hospitable and inhospitable worlds
5 days ago

To help Texans is to help immigrants