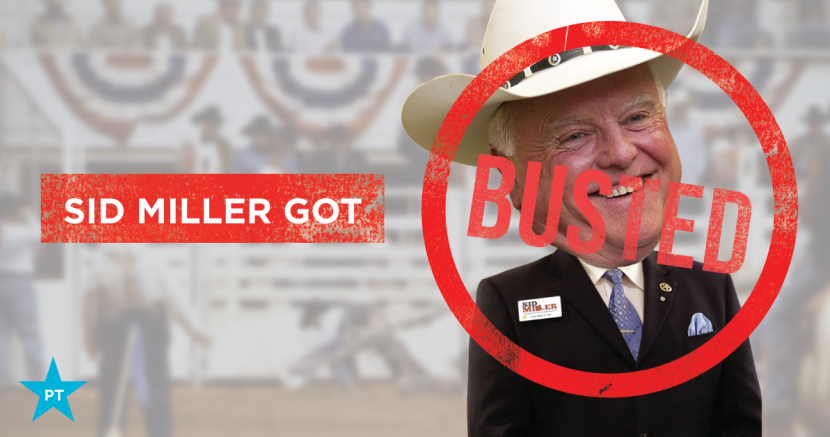 In response to a criminal complaint filed by Progress Texas, the Texas Rangers have launched an investigation into Texas Agriculture Commissioner Sid Miller for abuse of official capacity. Just a month after taking office, Miller started using Texas taxpayers’ money as his personal vacation fund — for trips to obtain a “Jesus Shot” in Oklahoma and later to compete in a rodeo in Mississippi.

Politicians like Sid Miller — who think they’re above the law — need to be held accountable for their criminal conduct just like everyone else.

Texans paid for Miller's trip to get a “Jesus Shot.”

The first criminal complaint requested that the Rangers investigate Miller for abuse of official capacity. Miller used state funds to pay for a February 2015 trip to Oklahoma to obtain a controversial pain injection known as a “Jesus Shot.” The bizarre trip and the botched attempt to cover up the trip’s real purpose were detailed by a report in the Houston Chronicle.

And then Miller tried to stick us with the bill for his trip to the rodeo.

Later that month — according to another Houston Chronicle report — Miller’s used campaign and taxpayer funds to pay for a trip to Mississippi to compete in a rodeo. Miller didn’t schedule or go to any meetings or events outside the rodeo. Just as he did with his trip to Oklahoma, Miller tried to stick taxpayers with the bill and then fumbled around to cover it up. He did, however, manage to make a quick buck off this trip, winning $880 in prize money. This wasn’t Sid Miller’s first rodeo, so to speak.

But using taxpayers’ coffers as his personal piggy bank is just the tip of the iceberg.

In case you don’t know much about everyone’s least favorite fried cupcake enthusiast Sid Miller, with over a decade in elective office in Texas, he’s been wreaking havoc on everything we stand for as progressives. From saying horrendous things about immigrants and Muslims, to authoring an awful anti-abortion, mandatory transvaginal ultrasound law, to dolling out huge bonuses to his cronies— Sid Miller’s laundry list of offenses is seemingly never-ending.