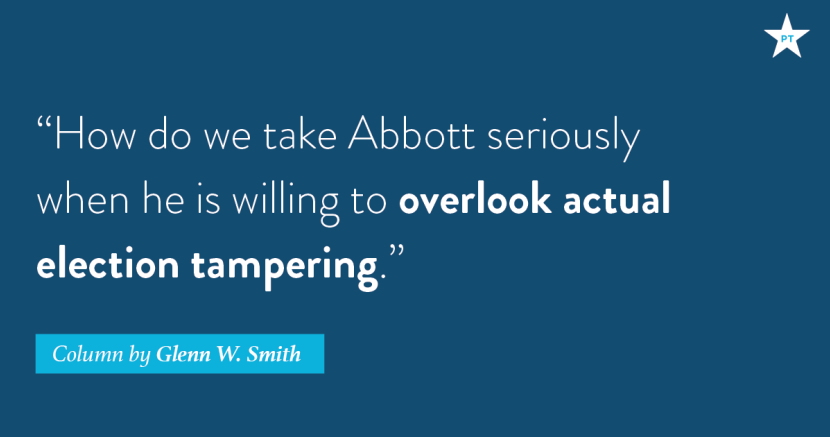 Peeking in Putin’s Bathroom Window, or Will Greg Abbott Get Serious About Election Integrity?

Shrugging acceptance by Greg Abbott and other Republicans of Russia’s hacking of the 2016 election betrays their real voter suppression intentions.

Gov. Greg Abbott sure is quiet about the fact that Russia’s Vladimir Putin’s spies and hackers successfully intervened in the 2016 presidential election, without a doubt the great election fraud scandal in U.S. history.

He’s not the only one. Donald Trump’s Republican allies in Texas are mum on the subject. Meanwhile, Abbot & Co. continue their efforts to try to turn minor instances of extraordinarily rare vote crimes into calamitous emergencies that require ever tighter restrictions on voting.

How do we take Abbott seriously when he is willing to overlook actual election tampering (by a foreign enemy!) on a scale no American election has ever suffered?

The Russians stole emails from Donald Trump’s opponents in the Democratic Party. They used spies and WikiLeaks to surface the stolen material during the election. They targeted U.S. voters – in a sophisticated campaign that almost certainly needed the help of American experts – to spread “fake news” to key voters about Hillary Clinton and the Democrats. The Russians succeeded in some instances in hacking state election officials’ voter files.

State voter files, by the way, are the ones the Trump White House is now demanding be turned over to their special commission on elections. Since the likelihood is high that Trump campaign types have already shared voter targeting materials with Russian social media campaigners, why would any state comply with that request?

That’s another good question for Abbott, who readily agreed to turn over the information to Putin. I mean Trump. There’s some question about whether private information won’t be turned over. Frankly, I don’t want the damned Russians to have my name, public as it is.

Another question:  If one of America’s major political parties is willing to excuse a foreign attack on a presidential election – as long as it was the candidate of that party that benefitted from the foreign attack – what is left of democracy?

If that same political party – here’s looking at you, Republican Party – is taking voting rights away from actual Americans while allowing Russians to intervene in elections – what is left of patriotism of that party?

The answer to that last question is “Nothing.” Nothing is left of the Grand Old Party’s American patriotism. It must be said that there are many patriotic Republicans. But those Republicans have been pacified, marginalized or scared into silence.

I’m sorry. I can’t get past a question above. Please remember than when Abbott was Texas Attorney General he had armed thugs from his office peer into the bathroom window of an elderly African American woman whose alleged offense was possibly helping elderly friends cast legal ballots. She was later found to have done nothing wrong.

Gov. Abbott, do you have the courage and patriotism to chase Putin into his bathrooms for his crimes against America? I doubt it.

Abbott is all over Twitter with alarmist tweets about every little election offense that can be found. Election-related crimes should be revealed and their perpetrators punished. No one disagrees with that. But, when those isolated cases are inflated into “crime wave” proportions in order justify various voter suppression efforts, we can no longer take Abbott’s concern at face value.

Here’s how the 69-year-old Fort Worth woman described in a sworn statement the incident involving Abbott’s election “investigators”:

“…these investigators then went to the window of my house and peeped into my bathroom window, not once but twice, while I was in my bathroom drying off from my bath. I screamed. The two men then disappeared from my window.”

So, Gov. Abbott, in the interests of election integrity, I challenge you to send to armed investigators to peep into Vladimir Putin’s window. You up to that?

Please be sure to wait until Putin has just stepped from the bath to dry off. Have your investigators peep twice through the glass. They should be certain that Putin sees them, because, after all, they are there to intimidate him. Right? Just like the elderly Fort Worth woman you hoped to intimidate into quitting her community activism?