Paul Ryan Was Against Paid Leave Before He Was For It 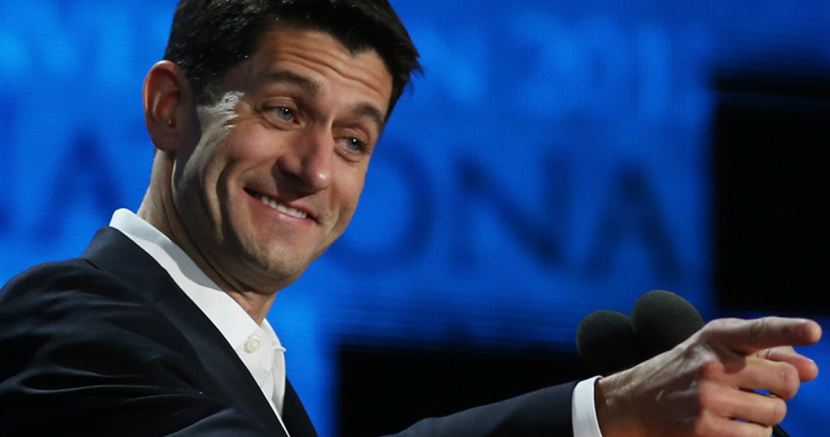 It looks like U.S. Rep. Paul Ryan, the Ayn Rand acolyte and failed vice presidential candidate, will become the Speaker of the U.S. House. This is after Republican House members capitulated to a series of Ryan demands, including a demand that he get what amounts to paid family leave on weekends. Say what?

Traditionally, a political party’s Congressional leadership – especially the speaker, majority and minority leaders – spend weekends and recess time traveling the country raising money for their colleagues. Ryan wants no part of that. He, like millions of Americans, apparently understands the importance of family time. Unlike millions of Americans, Ryan’s in a position to demand it as a condition of his employment.

There has always been a terrible logic to American conservatives’ positions on work, family and responsibility. Republicans hold to the bootstrap theory, a term once used to ridicule the awkward act of raising oneself by pulling on one’s own bootstraps. It has come to mean something like self-reliance or self-starting. But Republicans make bootstrapping even more ridiculous by using the power of government to take away the bootstraps.

American conservatism in practice is not the party of small government. It is the party that uses government to benefit some while punishing others. Government suppression of wages, for instance, with anti-union policies and meager minimum wage laws – these are conservative policies which rely upon government enforcement not government inaction.

The arguments against paid family and medical leave are simply ridiculous. Republicans ridicule the idea as just more “free stuff” that the unworthy haven’t earned and don’t deserve.

Republicans argue that businesses can’t afford to pay workers on leave because of illness or family leave. Really?

I’m guessing they already afford it when that worker is the CEO, CFO, or other leader. They just don’t call it “paid leave.” Huffington Post’s Amanda Terkel sums up this point:

“Data from the Bureau of Labor Statistics show that private sector managers and financial workers have access to paid leave at more than double the rate that service workers and construction workers do. The more a person makes, the more likely he or she is to get a paid leave policy.”

The callousness of those opposed to paid family leave is difficult to contemplate. Behind their belief is their knowledge that all workers are replaceable. An employee who gets sick is so easily replaced that resources don’t need to be devoted to that employee. It’s an “Adios, Mofo” policy writ large. But back to Paul Ryan. Ryan voted against a bill that would have given federal employees four weeks of paid paternity leave. And Ryan has helped block President Obama’s attempts to mandate paid family leave in the public and private sectors.

Hypocrisy is almost too kind a word for Ryan demanding for himself what he denies most Americans. His selfishness is even defeating what could be political expediency on his part. Most Americans – 67 percent of Republicans in some polls and 83 percent of all Americans – support some form of paid family leave. Today, men and women are often forced to choose between their jobs and their responsibilities to take care of a sick child or spouse. When they choose family, they often lose their jobs. So they are counted among the unemployed. Then Republicans brand them as shiftless or lazy for being unemployed. Unemployment benefits are limited because they are seen as just more free stuff for the undeserving.

No one gains from this mean-spiritedness. Productivity declines. People have less money to spend so the economy stagnates or declines. There’s a reason beyond compassion that almost every other developed nation in the world provides family leave. It makes for a healthy, stronger, more secure and economically vibrant nation.