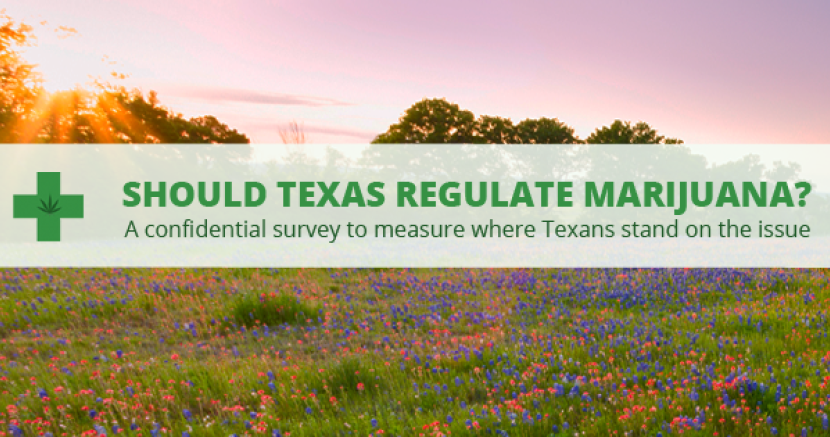 Here's a quick summary about medicinal marijuana, as found in our survey:

Currently 20 states and Washington D.C. have legalized medicinal marijuana use. Each state specifies its own way of implementing medicinal marijuana, though generally it involves a doctor's note and more generous decriminalization for patients. Since it is illegal for doctors to prescribe marijuana, they give a note acknowledging that a patient's health would benefit from the medicinal use of marijuana. (Source: ProCon.org)

The federal government found that teen use of marijuana actually dropped after medicinal marijuana became legal in Colorado in 2010.

This post is the second in a policy series diving deeper into marijuana regulation in Texas. Last week, we looked at the basics of marijuana decriminalization laws. Today's post explores the following information about medicinal marijuana policies:

If you know of additional information we can/should highlight, please e-mail info@ProgressTexas.org and let us know!

1. How Could Medicinal Marijuana Impact the Health of Texans?

Ed. note: The overview below contains information and ideas developed during a phone conversation and subsequent e-mails with Texas Coalition for Compassionate Care, a science-focused organization here in Texas devoted solely to understanding and educating the public about the impact of medicinal marijuana.

Like many other sciences, the science of medicinal marijuana is greatly misunderstood. But ever since CNN's chief medical correspondent, Dr. Sanjay Gupta, apologized for opposing marijuana last year, the science of marijuana has come out of the shadows and into the spotlight.

Earlier this year, the FDA "granted orphan drug designation for a cannabis-based drug developed to treat childhood-onset epilepsy" according to the Huffington Post.  Medicinal marijuana could help patients fight not only seizures and epilepsy, but also provide relief from nausea, and help patients suffering from diseases such as AIDS/HIV, cancer, Hepatits C, and more.

In Colorado, at least one organization is growing marijuana plants and removing the psychoactive component of marijuana, THC, to create a strain of marijuana known as "Charlotte's Web" that only contains the healthy CBD compounds. It has already worked miracles:

The strain was named for 5-year-old Charlotte Figi, who had been suffering from a rare disorder called Dravet’s syndrome, which caused her to have as many as 300 grand mal seizures a week.

Charlotte used a wheelchair, went into repeated cardiac arrest and could barely speak, but doctors were out of ideas for help. Then as a last resort, her mother began calling medical marijuana shops.

Two years later, Charlotte is largely seizure-free and able to walk, talk and feed herself after taking oil infused with a special pot strain. Her recovery inspired the Charlotte's Web name for the marijuana strain she takes in oil form that is bred not to have THC -- the ingredient that make users high.

Many remain hesitant to fully support medicinal marijuana, claiming more research needs to be done. That thinking is foolish, as Salon pointed out in their story, "The lie that won’t die: 'We don’t know enough about marijuana!'":

To date, there are over 20,000 published studies or reviews in the scientific literature referencing the cannabis plant and its cannabinoids, nearly half of which were published within the last five years according to a keyword search on PubMed Central, the US government repository for peer-reviewed scientific research. Over 1,450 peer-reviewed papers were published in 2013 alone. (By contrast, a keyword search of “hydrocodone,” a commonly prescribed painkiller, yields just over 600 total references in the entire body of available scientific literature.)

2. What Do the Medicinal Marijuana Laws in Other States Look Like?

Twenty states and the District of Columbia have some version of medicinal marijuana laws on the books. While each state is different, the following basic elements are common:

A complete and detailed list of the medicinal marijuana laws across the country can be found here.

The Texas Medical Association, the largest and most influential physician's group in the state, believes physicians should be able to to talk to their patients about treatments:

"Marijuana is illegal in Texas," the Texas Medical Association responded in a statement to KVUE Wednesday. "However TMA policy supports the physician’s right to discuss with his or her patients any and all possible treatment options related to the patient’s health and clinical care (including the use of marijuana) without the threat to physician or patient of regulatory, disciplinary, or criminal sanctions. TMA also calls for further well-controlled scientific studies of the use of marijuana with seriously-ill patients who may benefit from such alternative treatment."

3. What is the Public Safety Impact of Legalizing Marijuana for Medicinal Purposes?

Legalizing medicinal marijuana goes beyond decriminalizing it for patients or allowing physicians to prescribe it. The Supreme Court court and the Justice Department still do not see eye-to-eye on the subject, as the Marijuana Policy Project has detailed:

Some cling to the idea that marijuana is a gateway drug, and medicinal marijuana will put it in the hands of people who will then develop addiction to worse habits. That claim has been debunked a number of times, most recently and convincingly in the Journal of School of Health. A study of U.S. 12th graders found that alcohol, not marijuana, is the gateway drug:

"Some of these earlier iterations needed to be fleshed out,” [the study's co-author Adam] Barry said. “That’s why we wanted to study this. The latest form of the gateway theory is that it begins with [marijuana] and moves on finally to what laypeople often call ‘harder drugs.’ As you can see from the findings of our study, it confirmed this gateway hypothesis, but it follows progression from licit substances, specifically alcohol, and moves on to illicit substances.”

Additionally, a recent study by criminology professor Dr. Robert Morris of the University of Texas at Dallas found that medicinal marijuana legalization may actually reduce homicide and assault rates:

The main finding is that we found no increase in crime rates resulting from medical marijuana legalization. In fact, we found some evidence of decreasing rates of some types of violent crime, namely homicide and assault.”

The UT Dallas team began its work in summer 2012 after repeatedly hearing claims that medical marijuana legalization posed a danger to public health in terms of exposure to violent crime and property crime.

This post is the second in a series of policy posts about marijuana regulation in Texas. To support our research and outreach efforts, we encourage you to: