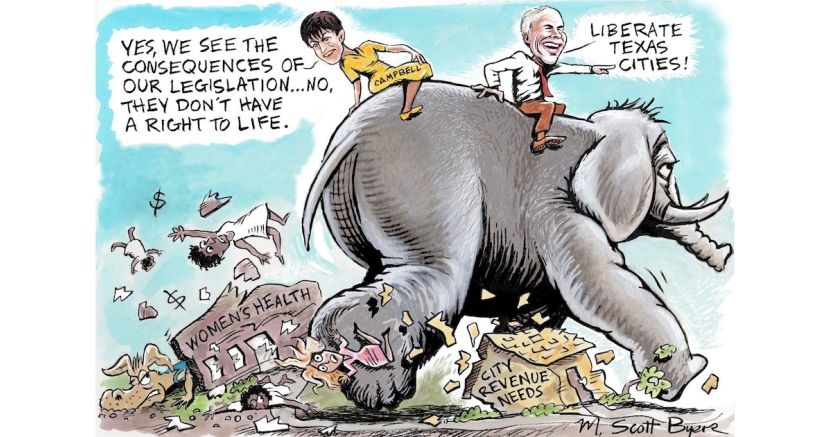 Local folks survived the Legislature, but not without real suffering

When it comes to evaluating a Texas legislator’s description of a new law she or he is proposing, here’s a good rule of thumb: If the lawmaker says, “This bill just...,” minimizing its scope or impact, be very, very skeptical.

For instance, when state Sen. Donna Campbell described an anti-women’s health bill by saying, “This bill just prevents taxpayer dollars from being used to support or prop up abortion providers,” we know it must do more than that. In this case, it denies critical health care services to tens of thousands of Texas women.

Another legislative attack on local government and health care, one that would have pre-empted local ordinances requiring paid sick leave, failed to pass the Legislature.

Before leaving the subject of Planned Parenthood, though, a little note for history. Earlier generations of Republicans helped found and lead Planned Parenthood, but that was before the overnight demonization machine — Rush Limbaugh, Alex Jones, Fox News, etc. — took over the GOP.

Today, a cruel ideology based on an unholy union of sectarian religious belief and bad science will cost untold numbers of Texas women their basic health services.

Looking at other legislative assaults on local governance, we find similar narrow-minded, hard-hearted and anti-democratic motivations.

For instance, the Legislature rejected a proposal to accept federal Medicaid dollars to extend health coverage to mothers for 12 months after giving birth (current coverage expires after two months). Besides the obvious harm to patients, the burden of providing care falls on local providers and taxpayers.

This is the way hidebound ideologies work. Consequences outside the blinkered gaze of the radical ideologue aren’t even seen, much less addressed.

In other words, the state of Texas is taking away local governments’ ability to raise future funds for fire, police, health care, flood control and other services, and it’s taking funds they already rely upon.

Galveston Mayor James Yarbrough summed it up: “Just in Galveston, these bills would create budget deficits impossible to absorb without public safety cuts,” he told the Galveston County Daily News, adding, “The history of Galveston is one of fiscal responsibility. It’s built into our city charter. We don’t need arbitrary restraints created by the Legislature and placed on our budget process.”

Real people will be punished by these laws. These consequences are not seen by radical ideologues. Let’s hope that’s the case, anyway. If they do see and celebrate these consequences, we have deeper problems than we might imagine.

“Home,” said Maya Angelou, “is the safe place where we can go and not be questioned.” But home, the safe place for family, the launching pad for all our futures, the dream Americans dream of self-determination — that is precisely what’s under assault from right-wing ideologues.

We choose our homes for their proximity to schools and health care. We engage in local politics so we can build futures for ourselves, our neighborhoods and communities. The Texas Legislature wants to take that away from us.