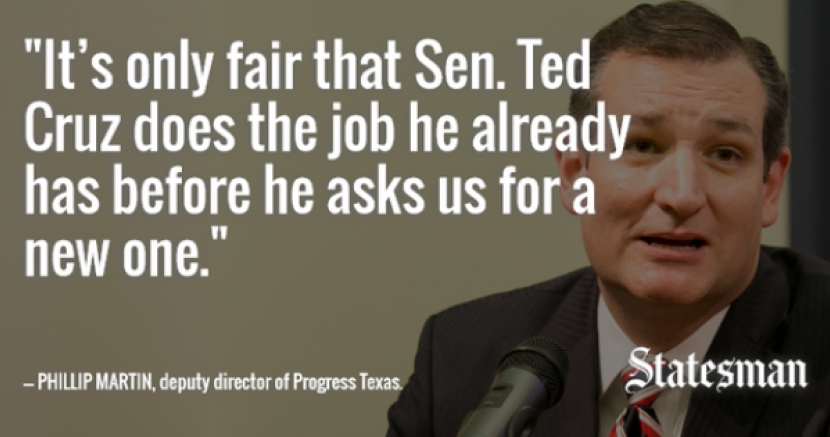 It’s only fair that Cruz does the job he already has before he asks us for a new one.

Today, the Austin American-Statesman ran an op-ed we wrote about Texas' judicial vacancy crisis. The op-ed, which was published under Progress Texas for identification purposes only, can be read online at the Statesman, or below.

Also today, the Center for American Progress released an infographic* showing that the U.S. Senate has confirmed just six federal judges to the bench in 2015 - while the number of judicial emergencies has nearly tripled. This is the worst obstruction of judicial nominations in more than half a century, with Sen. Ted Cruz leading the charge for delays.

Our op-ed, and the infographic, are below.

By Phillip Martin - Special to the American-Statesman﻿

The understanding that justice should be swift and everyone deserves their day in court is a fundamental American value.

But when that day in court takes over three years to complete, justice is no longer swift, and the delays can become a serious problem. After all, justice delayed is justice denied.

In Texas, those delays have become far more common since Sen. Ted Cruz took office. And with nine vacancies in Texas’ federal courts — and no nominees recommended from Sens. Cruz or Cornyn to fill any of those empty judge chairs — the delays are only going to get worse.

It creates a real challenge for Cruz. How will his dreadful history with judicial nominations impact his run for president?

Our courts matter. The most critical issues of the day — racial discrimination, equal pay, immigration, abortion, voting rights, same-sex marriage and death benefits, etc. — often end up in court. And while some don’t make the headlines and few ever reach the Supreme Court, each one of those cases matters a lot to someone.

Here are the facts: Texas has more empty seats in our federal courts than any state in the country. Added together, the nine federal bench seats have been vacant for more than 14 years.

Without enough judges to hear cases, the delays have stacked up. And it’s only gotten worse under Cruz.

Since Cruz took office in January 2013, the number of civil cases in Texas’ federal courts lasting three years or longer has more than doubled. During that same time, the number of overall cases left pending has gone up by 3,395 — an approximate 10 percent increase in inefficiency.

The reason is simple: There aren’t enough judges to do all the work.

Cruz has another inglorious fact to face: Since he took office, there’s been no women recommended to our federal courts. On the other hand, 12 of the 16 female judges currently seated in Texas’ federal courts were appointed while Sen. Kay Bailey Hutchison was in office — and the remaining four were there before she was senator in 1993.

Despite nine current vacancies in Texas’ federal courts, Cruz has put forward no nominees — female or male — in 2015. Now that he’s spending more and more time on the campaign trail, it’s fair to question whether or not he ever intends to fix the problem.

As Cruz travels the country asking people to give him the power to nominate judges, those of us who are his constituents here at home should ask him why he’s done nothing to fix the judicial crisis in his own backyard.

After all, it’s only fair that Cruz does the job he already has before he asks us for a new one.

*The infographic is updated on the Center for American Progress site when there is new judicial confirmation data. This image was last updated on October 7, 2015.