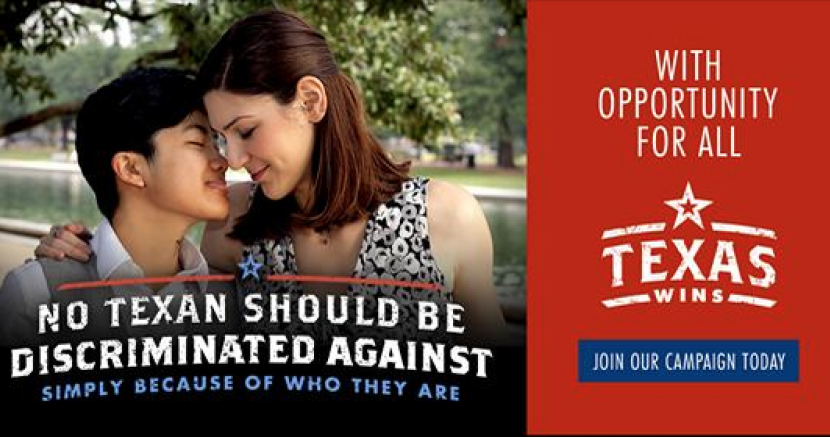 In Texas today it is legal to fire, deny housing or refuse service to gay and transgender Texans simply because of who they are. Without legal protections, many Texans must live with the burden of knowing that at any moment they could lose their livelihood with no recourse to defend themselves from discrimination. That’s why Texas Research Institute—Progress Texas’ educational arm—has joined a coalition of groups to launch Texas Wins—a new grassroots campaign that will fight back against discrimination in our state.

Click here to join the Texas Wins campaign to end discrimination against gay and transgender Texans.

In the absence of statewide protection, cities and counties across the state have acted, extending discrimination protection to LGBT residents. But these local laws are under attack by Republicans in the Texas legislature.

Senator Donna Campbell and Representative Jason Villalba have proposed two radically discriminatory bills aimed at rendering these local nondiscrimination laws toothless under the guise of “religious freedom.” These constitutional amendments—SJR 10 and HJR 55—would allow individuals and institutions to fire or turn away LGBT Texans and would also harm women, children and Texans of all faiths.

Though we’ve come far in the fight for equality, with the freedom to marry in sight, we still have a lot of work to do towards justice for all Texans. Click here to sign Texas Wins’ pledge, because it’s time to end discrimination against LGBT Texans.