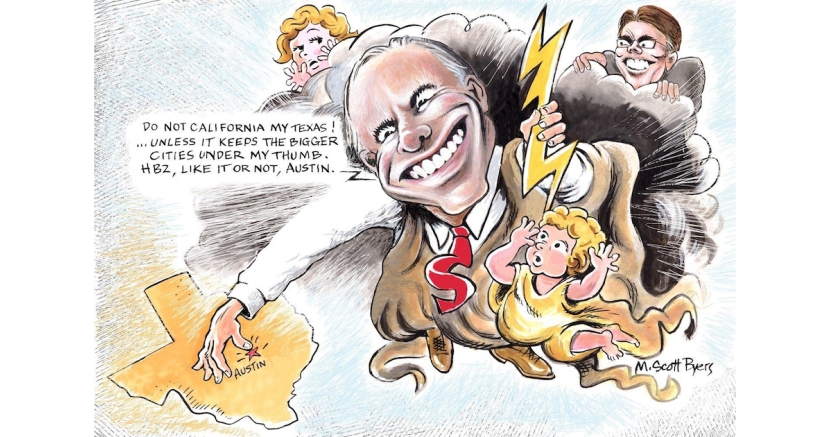 It's Texas Republicans who want to "California" Texas

In an effort that looks something like California’s notorious 1978 Proposition 13, which is still wrecking California’s public education, housing market and tax structure, Republicans in the Texas Legislature are keen to impose a property tax cap on the state’s cities and counties.

California’s Prop 13, according to a 2018 opinion piece in the Los Angeles Times, “hit every generation following the baby boomers particularly hard. California is left with a housing shortage and not enough turnover in the real estate market... the overall tax burden has been shifted to more heavily burden nonproperty owners — increasingly Gen-Xers and millennials who can’t afford to buy a house.”

Not a great recommendation for property tax caps. Oddly, Texas Republicans are the same ones who use California as a symbol for all that’s evil in the political and economic world. One of Gov. Greg Abbott’s mottos is, “Don’t California My Texas.” But, when it comes to property taxes, that’s just what Abbott & Company are doing.

Opponents of this year’s legislative effort to handcuff local governments could even adopt Abbott’s motto, were they goofy enough to use the word “California” as a verb.

The bill passed by the House Ways & Means Committee, House Bill 2, would cap increases in property tax revenue at 2.5 percent from one year to the next. Increases larger than that would have to be approved by voters. Currently, the measure applies only to cities and counties.

School districts, which in many cases were forced to raise property taxes as the Republican-led Legislature dramatically decreased state funding for schools, are, at the moment, exempt from the bill. This has riled some right-wing lawmakers, however, so watch out, educators. The bell you hear tolls for thee, and it does not mean it’s time for recess.

Speaking of public education, George W. Bush, as a Texas governor campaigning for president in 1999, said, “It is conservative to insist upon local control of schools.” The situation, it appears, has changed.

Of course, it wasn’t so very long ago that American conservatives loathed the idea of changing one’s view simply because the situation had changed. That was called “situation ethics,” which the Christian Courier said was a “voguish belief in a world of immoral rebels who are determined to cast off divine restraints and play God.’”

Now we know who to blame if the tax caps are approved and the local fire department is late to the fire, or the police don’t answer our emergency call, or our car plummets into a bottomless pothole local government could no longer afford to fill. Blame the God-playing hypocrites of today’s Texas Republican Party.

And never forget that property taxes have soared because these same Republicans turned their backs on school funding. Local school districts were forced to make up the losses in state funds. Now the culprits in Austin claim they want to address our property tax concerns by attacking our critical local government services.

One more thing. It matters that GOP lawmakers are, at the same time, engaged in significant efforts to disenfranchise local voters with their voter suppression schemes. It’s their insurance against the chance citizens might vote to fill the potholes.