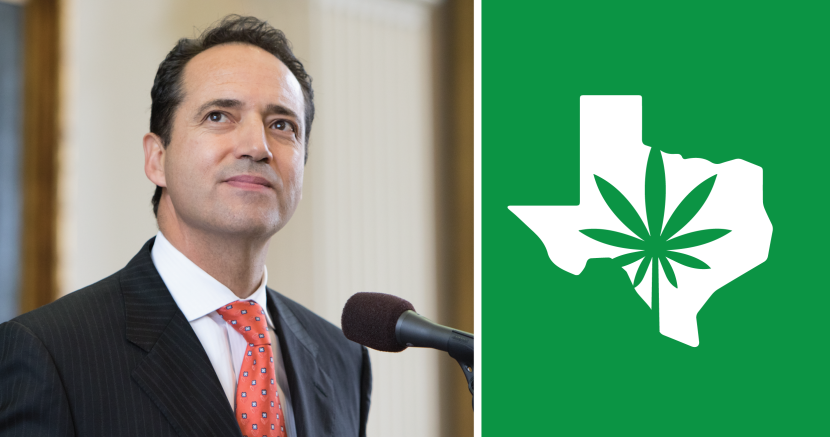 Phillip Martin
The science is in. Medical cannabis can provide relief for a variety of diseases.

This blog is cross-posted from the Texas Research Institute.

In 2015, Rep. Marisa Márquez and Sen. José Menéndez filed legislation to create Texas’ first comprehensive medical marijuana program. It was the first time a bill of this scope was ever filed in Texas.

The bill would have allowed qualified patients, once they have received a doctor's note and registered with the state, to purchase and/or grow medical marijuana from a licensed dispensary. Though the bill had a robust public hearing, it didn't make it out of the Texas House Public Health Committee.

With the Legislature set to meet again in less than a year, we reached out to interview Sen. Menéndez to learn more about his bill and how he thinks it may change in the future. Below is a transcript from our interview.

What’s the thirty-second pitch for your bill?

The science is in. Medical cannabis can provide relief for a variety of diseases, from seizures, to autism, to cancer, Krohn’s, PTSD and others. But yet I don’t understand why states keep their heads in the sand – they’re afraid of outdated stigmas.

Last session, we filed Senate Bill 1839, and I think that would have provided a safe and legal framework for patients to get prescriptions – medicinal cures with cannabis – for their doctors. I think government needs to stop picking and choosing which medicines are good to treat diseases for families.

I want to dive into your legislation a little bit, since it touches on so many areas of state government. For starters – how would this impact the health system in Texas?

I don’t see how it drastically affects the system, because you already have nearly half the United States distributing medical cannabis, so I don’t see it being disruptive in any way. It’s quite normal to treat cancer patients and others with medicinal cannabis. Even in Texas, they prescribe Marinol, which is just a synthetic form of medicinal cannabis, but it’s not effective.

How about the budget - what's the impact we could expect there?

Other states have decided to allow for medical cannabis to increase state revenue, and I think that would help us. If you look at licensing we would get – the revenue we get from licensing – as well as the fees and taxes, it’d have a huge economic impact of a regulated medicinal market, which would mean billions of dollars to the bottom line of the state in benefits.

That’s true – I’m not aware of another industry with this kind of potential that isn’t being taxed that, at the same time, is 100% willing to be taxed and regulated.

I completely agree. Think about the significant amount of money you would get for not arresting or prosecuting low-level offenders for simply trying to treat a medical condition. Take a look at our veterans – they know that PTSD can be treated and measured with a doctor recommended prescription of cannabis. Yet in our nation, so many people who can be called heroes are denied treatment. A soldier can risk his life in the horror of war, come home, and then be denied effective treatment for his or her PTSD.

One thing that folks may not realize is that medical marijuana is a fully-fledged business, and it’s a lot more than just getting a doctor’s note and go buy medical marijuana. Can you speak a little bit about how this industry would be regulated?

The state would tightly regulate the four types of licensed medicinal cannabis businesses – the growers, the labs, the product manufactures and the dispensaries. Each of these establishments can only operate after paying a $20,000 fee, and adhering to comprehensive and exhaustive state regulations. So the entire program would generate significant revenue for the state, and it would make sure you don’t have fly-by-nights. This would be an industry that would be set up by professionals. Each of these would be thoroughly tracked for the production and reporting of all steps to the states. We want Texas to give actual medicinal cannabis that will help people.

You’re talking about Senate Bill 339, the CBD-oil bill, and it laid out a foundation from which you can build a comprehensive medicinal cannabis regulatory system. Next session, our bill will look much different because it is going to build upon the law that already passed. By doing so, rather than starting from scratch, we can increase the amount of THC allowed in the medicinal cannabis and increase the amount of diseases the state authorizes that can be treated under the law.

Who does your bill help that the current CBD-oil law doesn’t help?

We know that Senate Bill 339 is a true blessing for families who have children and adults that are suffering from epilepsy, but unfortunately it is so limited that it can’t help everyone else. What I’d like to do – with a regulated and equal and measured medical cannabis program, is help everyone else like the other twenty three states. These states have chronicled successful treatment not only for children with epilepsy, but also with cancer patients, veterans struggling with PTSD, and a range of other chronic debilitating conditions. Let’s help those with auto-immune disorders, like MS or rheumatoid arthritis. We don’t know [in Texas] because so many people here in Texas haven’t tried to see what the positive effects could be on other chronic conditions.

Many studies have shown that states that allow medicinal marijuana have seen no increase in crime or teen use. Despite the facts, though, the myth persists –it’s one we still hear from opponents of medicinal marijuana. How do you respond to those concerns when you hear them?

I think the medical benefits of regulated, doctor-recommended cannabis are incontrovertible. It’s been proven by decades of peer-reviewed and controlled studies published in medical journals. So when you have something that has shown to alleviate symptoms of a wide range of incapacitating medical conditions, you have to say to yourself, “do you trust doctors and parents more than you trust politicians?”

Right now, you can visit many concerned parents who are desperate for medicinal cannabis to help their children with a variety of afflictions. When they visit the Capitol I tell them they are trying to do what any parent would do: advocate for safe medicine and relief for their suffering children. It’s time for the state to stop criminalizing being a mother or a parent and help them gain access to regulated, effective treatment to help their kids.

We know that bringing cannabis out of the shadows and into a regulatory framework will actually decrease the illicit use. When the federal government tried with the prohibition of alcohol it failed miserably and there was no safeguard to prevent children or others from accessing alcohol because it was controlled by organized crime. Same thing is happening with cannabis for places that don’t have a regulated, government-sanctioned marketplace. What this bill would do is help create a legal framework for people who actually need it.

What do other legislators ask you the most about your bill? What questions do you get from lawmakers as you talk to them about this law?

Unfortunately, privately many of them support it – but they feel the political blowback might be too strong for them to survive. They understand this is real medicine that could have a real impact on our families and our veterans, and they understand the benefit economically. But they are worried about the stigma – though it could loosen up.

If you look at [SB 339], it passed with bipartisan support. I think we need to do what we can, as a community, to show them that the state is behind this and that the people are behind them and they’re not going to pay a political price if they support medicinal marijuana.

This issue is popular among a wide range of Texans, an upwards of 70% of Texans support some of these laws, but it’s not one that many people have been willing to champion. What made you decide to take the lead on this legislation?