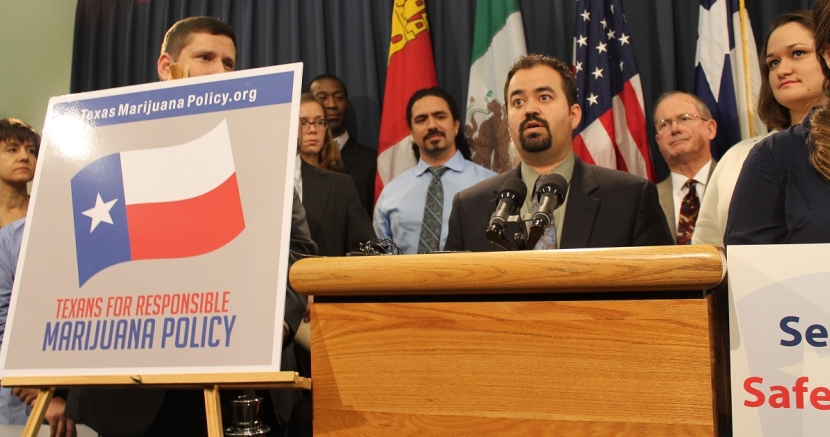 Phillip Martin
Moody proposes changing state law to issue tickets instead of jail time, which would save local taxpayer dollars and allow law enforcement to focus on more serious crimes.

This post is cross-posted from the Texas Research Institute, our 501(c)(3) affiliate.

A number of recent polls have shown that it's clear a majority of Texans support marijuana policy reform. As we track bills in the Texas Legislature filed to address this reform, one stands out: a bill by Rep. Joe Moody (D- El Paso) that would reduce the offense to a civil penalty, instead of a criminal penalty, for possessing small amounts of marijuana.

Moody proposes changing state law to issue tickets instead of jail time, which would save local taxpayer dollars and allow law enforcement to focus on more serious crimes.

Rep. Moody is an attorney from El Paso with years of experience in the criminal justice area. First elected in 2011, he was named Freshman of the  Year by the Texas District and County Attorneys Association. Last session, in 2013, the same group honored him with the Law & Order Award, for his work serving on the House Criminal Jurisprudence Committee, as well as the Select Committee on Criminal Procedure. Rep. Moody returned to the Capitol this session and was named Vice-Chair of the Criminal Jurisprudence Committee.

Below is our interview with Rep. Joe Moody, talking about his experience with criminal justice issues and learning more about how his House Bill 507 bill would work.

What is your elevator pitch for HB 507?

At a basic level, this is good government.

This is going to save taxpayer dollars at the local level, with both city and county officials. It is going to make law enforcement more effective because they are going to be able to utilize their time and limited resources on more violent crime. And for those trapped up in the criminal justice system under our current laws, it is going to be a fairer system for them, that will keep them from becoming unemployable later, keep them on financial aid, let them keep their ability to make a living as they move on in life.

In all aspects it will have a positive impact for Texans.

Your bill changes the penalty for a small possession of marijuana from a criminal penalty to a civil penalty. You’ve spoken before about how that’s a unique challenge to crafting the policy.

When we first made the request through Legislative Council, I think there was some question about how it’s done. Because in Texas, in the past, if there’s something we don’t like it becomes a crime. Every Class C traffic ticket you can think of is a crime.

A lot of states have civil sanctions for a myriad of things. Texas does not. The only policy that’s even comparable is something like a red-light camera violation is a civil sanction. And that’s not a statewide effort – that’s local entities even given the authorization to do it if they want to do it. So moving to civil penalties statewide [in HB 507] is really a first of its kind.

In the supporting materials for the bill, you talk about how we can save taxpayer funded resources for serious crime. How does that work? How does your bill save money?

To give you an example: an officer who makes an arrest today for a small possession of marijuana could be off the streets for up to half of their shift, processing that individual and doing the paperwork that goes along with that arrest. That’s half their shift off the streets and not looking for drunk drivers, investigating domestic violence, looking into burglaries, or things of that nature. We are using what resources we do have on something that are, by and large, young offenders who are nonviolent.

There’s a cost to incarcerate someone in our county jails. Every county has to deal with that budgeting, and the prosecution for those cases. How many times do you come to court on those, how many times are they going to go to trial, how much is the cost for probation for those individuals.

By tracking this out of the criminal arena and making it a civil sanction only, we streamline that entire process, get law enforcement back on the streets quicker to look into actual threats to our community, and we save money in the process.

What’s the feedback been like since you filed your bill?

The feedback’s been overwhelmingly positive. I think because it is a very new idea, there’s been a lot of questions about how it works, functionally, and there’s some confusion of language, because of what’s been happening.

Some people think this is tantamount to what was done in Colorado or Washington, and it is not. Part of our work is to educate people about what we are trying to do, why it is effective and why it’s right for Texas.

The response from both sides of the aisle have been very good. Republicans Against Marijuana Prohibition, a citizen activist group, is all over the Capitol talking to Republican members about it. A lot of groups are talking about the benefits of doing things this way and changing our policies, and the response has been very good. Now it’s just a matter of getting it into the committee process and getting it on the floor.

What makes this bill special to you – what made you decide to take this on and file this bill this session?

I’ve worked heavily in criminal justice issues in my previous two sessions. I see a large national discussion going on when it comes to marijuana enforcement, and Texas has been absolutely absent from that discussion.

Texas should be a leader in the discussion of this kind. That’s why I wanted to get involved and talk about different ways we can be better stewards of our resources, and just be smarter in the criminal justice arena.