The Icky Bathroom Obsessions of the Right 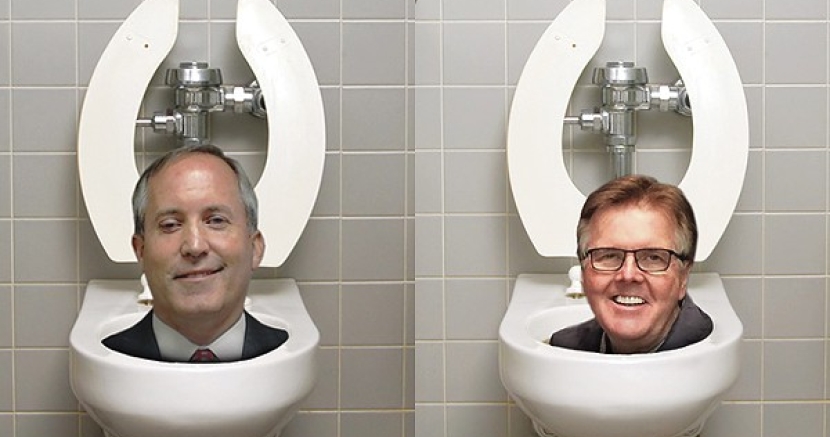 Glenn W. Smith
Republican lawmakers are using transgender people as a scapegoat to draw attention away from the issues that matter.

The icky bathroom obsessions of Lt. Dan Patrick, U.S. Sen. Ted Cruz, Gov. Greg Abbott and other Republicans make me wonder whether we need segregated public restrooms after all: one set for Republicans, another set for Democrats.

As Bill Maher often says, I kid, I kid. But on a serious note, the GOP’s new “wedgy” issue does raise an alarming question: who in hell is going to do the up close and personal inspections of public restroom users to make certain they are in the proper public facility?

We may not have to worry much longer about public school restrooms, though, because right-wing Texas seems to be on the road to eliminate public schooling altogether. Today, the Texas Supreme Court ruled that Texas’ unconstitutional public education system was constitutional after all, furthering the right-wing goal of erasing the “public” from education in favor of unaccountable corporate control.

But forget education. That’s so yesterday. We should focus on today’s most critical issue, potty policing. In the nick of time, the Texas Republican Party has gathered for their state convention in Dallas. Sure enough, right off the bat came yet another Patrick potty polemic.

“It’s great to be in the largest Republican convention on the planet and not one man wants to use the ladies’ room,” Patrick said. Maybe not, but a lot of them sure like to keep their minds in the gutter or the bathrooms.

I’m reminded of Houston’s late anti-porn activist Geneva Kirk Brooks. Back in the day, no one made pornography more public than the anti-porn Ms. Brooks. She brought pictures, stories and tapes of the stuff to City Council meetings. There were times her testimony was so blue they had to silence her microphone.

Look out below. Today, “the head,” so to speak, will explode in Dallas. The Obama Administration sent a letter to the nation’s school districts affirming the civil rights of transgender Americans. The letter said transgender students must be allowed to use the bathrooms that align with their gender identification.

This is a “three-fer” for the Texas GOP: a black president invokes civil rights to protect transgender people.

It is, of course, a ridiculous issue, and all the obsessive fantasies invented by Patrick won’t change that fact. Patrick and others say predatory men will feel empowered to invade women’s public restrooms to assault or terrify women. “Our daughters” are regularly invoked to put the proper “vulnerability of innocence” spin on the matter.

They find it impossible to explain why there are no reported instances of such assaults to justify their lurid scare tactics. In concert halls, ballparks, airports and other public settings, people have been using the bathrooms that align with their gender identity since public restrooms were segregated by gender.

If you listen carefully to those on the far right, you’ll find that not only our bathrooms but also our neighborhoods, our schools, our jobs, our streets, and everywhere else are full of dangers that only faux heroes like Patrick can save us from.

This is where we might return to the issue of education. The Founders dreamed that a well-educated electorate would be the backbone of democracy.  Educated Americans would be less vulnerable to clownish or dangerous demagogues.

Is it any coincidence that the rise of the new American demagogue and the decline of commitment to public education are happening at the same time, and that it is the former who is most responsible for the latter?

If we still have public schools in the future, we would do well to teach our children that scapegoats never assaulted anyone anywhere. As is made clear in the Bible, they are blameless by definition.

It is a tragedy that so many are so vulnerable to the dark fantasies of the Donald Trumps and Dan Patricks of the world. Trump and Patrick are not scapegoats. They are real. They are the high priests of scapegoating who find it very convenient to their ambitions to create fear and dread of “Others.”

Because of their efforts, the land is so full of scapegoats we’re running out of wilderness to exile them to. It’s hard to imagine the fevered dreams of the paranoid that all this hate has created. It’s enough to make us sick at our stomach. If only we knew where it would be safe to be sick.