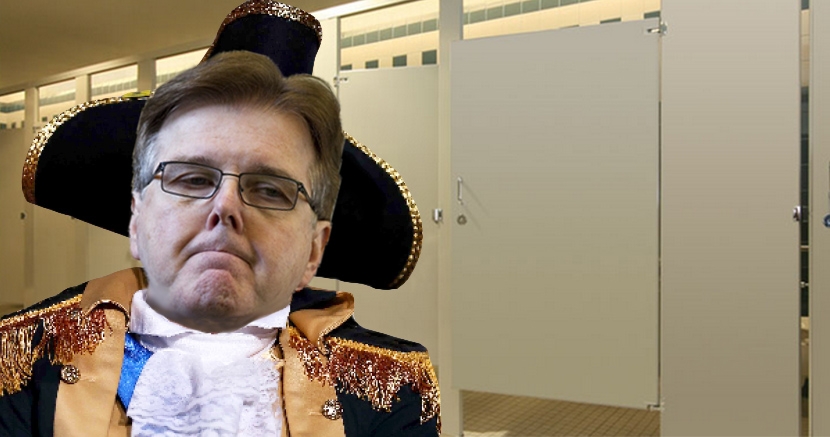 Progress Texas
Are you sick and tired of hearing transphobic bathroom lies coming from Texas Republicans? Well, so are we.

Are you sick and tired of hearing transphobic bathroom lies coming from Texas Republicans? Well, so are we. The transgender community is one that many people are just learning about, but that doesn’t mean that government officials have license to discriminate against them.

So whether it's your Tea Party uncle, that conservative friend of yours on Facebook you should’ve unfriended long ago, indicted Attorney General Ken Paxton, or Lieutenant Governor Dan Patrick...we've got you covered.

You say: A transgender woman is not a man and should not be forced to use a men’s restroom. Transgender people are often victims. Forcing transgender people to use the bathroom that doesn’t match their gender identity puts them at a very real risk of harassment, abuse, or attack.

All these so-called “bathroom bills” do is target transgender people for discrimination and can be summed up as a solution in search of a problem, which is probably why nearly 6 in 10 Americans oppose these bills. Transgender people are part of our community, need to be able to safely access restrooms, and should be treated with dignity and respect just like everyone else. A transgender man takes selfie for the #WeJustNeedToPee campaign.

Tea Party Uncle says: “Men are going to pretend to be women to prey on women and children in bathrooms!”

You say: That. Is. Ridiculous. You are essentially saying “we can’t protect transgender people, because if we do, everyone is going to pretend to be a trans person.” And that has literally never happened, but Republicans promote these fears as if these assaults are happening everywhere — without offering even a single example because there isn't one.

Regardless of gender, it is already illegal to enter a bathroom to harm or invade someone’s privacy. And criminalizing transgender people’s innocent use of the bathroom does nothing to increase public safety. To date, 17 states and more than 200 cities have enacted laws to end discrimination against gay or transgender people and none have resulted in bathroom assaults.

Tea Party Uncle says: “Being transgender is not a real thing!”

A transgender person is someone whose sex at birth is different from what they know they are on the inside. Transgender people and their gender identities are supported by science and the experiences of hundreds of thousands of people.

At least 12 states and 17 school districts have for years let transgender students use the bathroom or locker room that matches their gender identity, and they have never reported problems. And when a school district in Fort Worth allowed it here in Texas, it wasn’t alone: Houston, Dallas, and Austin school districts have implemented similar policies without incident.

Tea Party Uncle says: “Hey don’t blame me, Obama is making us do it.”

You say: Interesting revisionist history, but that simply isn’t true. Republicans have been pushing these so-called “bathroom bills” for nearly a year in an attempt to nullify LGBT non-discrimination protections and thwart local control. The Obama administration got involved because discrimination anywhere is a threat to liberty everywhere. The President is doing the right thing in standing up to stop discriminatory laws.

Tea Party Uncle says: “People should be required to use the restroom that matches the gender on their birth certificate — we need a law for that!”

You say: That doesn’t make sense at any level. Who is going to act as the bathroom police? How would someone perform this genitalia inspection? Will people be required to carry around birth certificates to use the bathroom? Who will be asked to check?

In addition to being totally unenforceable, the so-called “bathroom bill” coming down the pipeline next legislative session creates real public safety issues — not to mention the real negative impact it would have on the Texas economy.