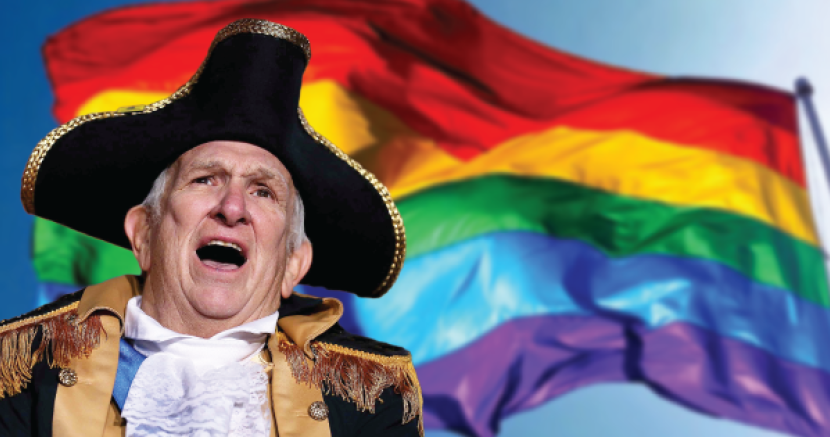 How to Talk to Your Crazy Uncle About Marriage Equality

How to Talk to Your Crazy Uncle About Marriage Equality

Even as marriage equality sweeps across states throughout the country—32 and counting— Texas Republicans remain hell bent on discriminating against LGBTQ Texans, using some insanely backwards and bigoted arguments to deny loving Texan couples the freedom to marry.

Texas Republican nominee for governor Greg Abbott is currently using these arguments in court to defend Texas' ban on same-sex marriage. When asked if he would have similarly defended a ban on interracial marriage, Abbott refused to answer, saying: "the reason why you're uncertain about it is because I didn't answer the question." And Ted Cruz just called a Supreme Court decision that struck down marriage bans across the country "tragic and indefensible."

Whether you find yourself cornered by your crazy Tea Party uncle, or his buddies Greg Abbott, Dan Patrick, and Ken Paxton, or the hero of all crazy uncles, Ted Cruz, we’ve got you covered.

CRAZY UNCLE SAYS: Texas passed a constitutional amendment to define marriage as between one man and one woman!

YOU SAY: Less than 14% of registered voters—a far cry from a majority of Texans—voted for the 2005 constitutional amendment. And over the past nine years, opinions have changed here in Texas, as Texans come to understand that extending the freedom to marry to same-sex couples strengthens families and improves communities. A recent Texas Tech poll shows that for the first time, more Texans support the freedom to marry than oppose it.

A federal judge has since struck down the law as unconstitutional. Don't forget, Texas’ law banning interracial marriage was the law of the land until it was invalidated by the Supreme Court's 1967 decision in Loving v. Virginia.

CRAZY UNCLE SAYS: Marriage is about having children and raising a family. Gay couples can’t have or raise kids!

YOU SAY: For some, marriage involves raising children, but many straight couples choose not to or are unable to have children. Yet we don't deny them the freedom to marry.

And same-sex couples do have children. Research proves that children raised by gay or lesbian parents are just as—or more—well-adjusted, happy and healthy as children raised by straight parents. It is good parenting—not the gender of the parents—that matters.

CRAZY UNCLE SAYS: Giving same-sex couples the freedom to marry starts us down a slippery slope. Polygamy, incest and pedophilia come next!

YOU SAY: That's the same slippery-slope argument racists once made about the dangers of interracial marriage. Polygamy involves a host of religious liberty issues that do not come into play in the relationships of committed couples.

CRAZY UNCLE SAYS: The bible is against it!

YOU SAY: First, put down that pork chop. Second, the bible is also against touching pigskin (yes, football!), getting divorced and remarried, and working on the Sabbath.

There is a distinction between legal marriage and religious marriage. LGBTQ Texans want equal protection of the law for the their families. It is entirely possible to protect the freedom to marry while also preserving the rights of religious institutions.

YOU SAY: I wish I could send you somewhere to be "fixed." Reparative therapy, or the practice of attempting to change a person’s sexual orientation, has been criticized by the Texas GOP Chairman, but more importantly, condemned and discredited by all mental health professions.