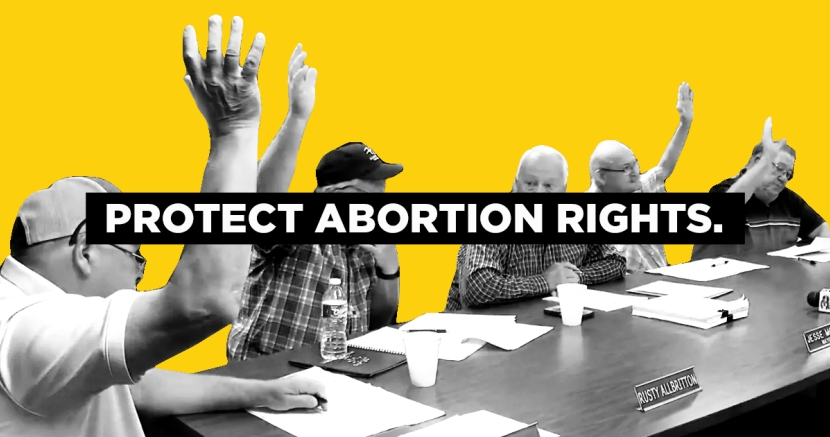 These unjust actions prove why it's important to fight for abortion rights everywhere because the men who are fighting against our rights – the rights of Texans – are not letting state lines stop them.

Update (10/15): Since the Waskom City Council voted to outlaw abortion in June, more East Texas towns have adopted the restrictive ordinance, including Naples, Joaquin, and Tenaha. Another town, Gilmer, also voted to adopt the ordinance, but only after removing several provisions.

While towns like these have followed in Waskom's shameful lead, other towns like Mineral Wells did not succeed in passing the ordinance because of the strength of repro rights advocates that have come out against it. Even Omaha, the second city to pass the ordinance, has since walked back their decision and instead decided on a resolution.

Make no mistake, these ordinances are unconstitutional, illegal, and meant to confuse Texans. Abortion is still legal in our state and in our nation, and these towns do not have the power to change that. These abortion-ban ordinances show the desperation of the anti-choice movemen​​​​t. They will be litigated and they will be stopped.

This week, Waskom City Council voted to outlaw abortion in response to national abortion bans popping up across the country.

The unanimous vote came from a committee of all men. The city took up the vote after lobbying from Texas Right to Life, an anti-abortion rights organization, which was fearful that a clinic would move across state lines from Louisiana after that state passed anti-abortion legislation.

"These unjust actions prove why it's important to fight for abortion rights everywhere because the men who are fighting against our rights – the rights of Texans – are not letting state lines stop them," Progress Texas said in a statement. "This small town response to the country’s growing abortion bans reveals anti-abortion extremists’ agenda to push abortion out of reach is happening at all levels."

Abortion remains legal in Texas. A majority of Texans and Americans continue to support access to safe, legal abortion care and say that they do not want Roe v. Wade overturned.

"Waskom’s ordinance, which claims to ban emergency contraception and abortion care, demonstrates its lack of concern for the health of its citizens," said Anjali Salvador, staff attorney at the ACLU of Texas, in a statement. "The ability to access contraception and abortion care is critical to people’s health and dignity. No one’s access to health care should depend on where they live."

Abbott has also signed legislation requiring women under the age of 18 to go through additional financial and mentally costing barriers before obtaining an abortion. Texas law already creates extensive barriers to women seeking abortion regardless of age.

We need leaders at all levels of local, state, and national government to support, trust, and respect an individual’s health care decisions and guarantee the right to abortion.

6 Takeaways from the U.S. Senate debate in Austin
1 week ago